The Ayrshire breed originated in the country of Ayr in Scotland, prior to 1800. The county is divided into the three districts of Cunningham, in the more northern part, Kyle, which lies in the centre, and Carrick, which forms the southern part of the country. During its development, it was referred to first as the Dunlop, then the Chillingham, and finally, the Ayrshire.
How the different strains of cattle were crossed to form the breed known as Ayrshire is not exactly known. There is good evidence that several breeds were crossed with native cattle to create the foundation animals of the breed. In Agriculture, Ancient and Modern, published in 1866, Samuel Copland describes the native cattle of the region as "diminutive in size, ill-fed and bad milkers." Prior to 1800 many of the cattle of Ayrshire were black, although by 1775 browns and mottled colours started to appear.

Probably the improvement of the native stock began around 1750 when it was crossed with other breeds. The principle blood used in improvement was that of the Teeswater stock, which later was largely used in the formation of the Shorthorn breed in England. A majority of the breeding in the Teeswater region was from Dutch and Flemish cattle that also were used in the formation of the Holstein breed. Animals from the West Highland and improved Shorthorn were used to improve the Ayrshire stock. There is also considerable evidence that cattle from the Channel Islands were used in the improvement of the cattle in Ayr. It is to the credit of the Scottish farmer that they used any available improved stock that they felt would improve their cattle for the practical use in their area.

Regardless of the details of origin, the early breeders carefully crossed and selected the various strains of cattle to develop the cow we now know as the Ayrshire. She was well suited for the land and climate in Ayr. She was an efficient grazer, noted for her vigour and efficiency of milk production. She was especially noted for the superior shape and quality of her udder. The composition of her milk made it ideally suited for the production of butter and cheese by the early Scottish dairymen. 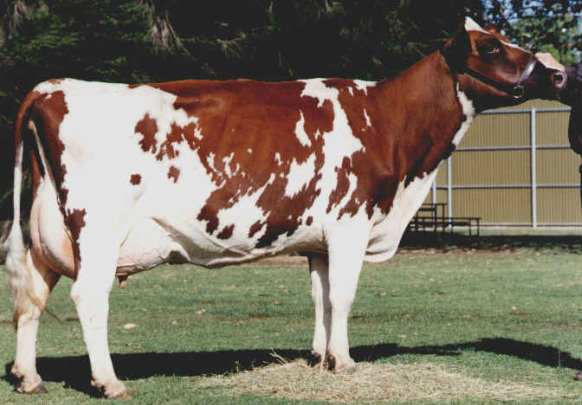 Known for their trouble free, ease of calving with heifers having few problems. Milk is naturally high in protein, with an ideal fat / protein ratio for the modern milk market and can produce high volumes. Also known for its foraging ability in all types of terrains and climate.

Ayrshires have proven that they can remain year after year, producing milk well after others have fallen. Having fewer vet visits makes it a more economical option. Today's modern Ayrshire cow has an ideal make-up to be able to compete with all breeds in all conditions. There are many pluses for the commercial breeder to use Ayrshire semen.

The development of the Ayrshire breed is a story of dedicated people as much as it is of great dairy cattle. Farmer breeders, whose livelihood depend on their cattle, along with wealthy hobby farmers, talented and dedicated herd managers all share equal credit for their contributions to the development of the Ayrshire breed. The Ayrshire cow is universally recognised as one of the most beautiful of the dairy cattle breeds, but much more important is the fact that she has been bred and developed to be a useful and profitable dairy cow. With proper feeding and management, the Ayrshire will produce at a profitable level for her owner. By using the modern breed improvement tools of DHI and DHIR testing, type traits appraisal, and artificial insemination, an Ayrshire breeder can be sure of breeding better Ayrshires to meet the demand for the modern dairy industry.

Ayrshires are red and white, and purebred Ayrshires only produce red and white offspring. Actually, the red color is a reddish-brown mahogany that varies in shade from very light to very dark. On some bulls, the mahogany color is so dark that it appears almost black in contrast to the white.

There is no discrimination or registry restriction on color patterns for Ayrshires. The color markings vary from nearly all red to nearly all white. The spots are usually very jagged at the edges and often small and scattered over the entire body of the cow.

Usually, the spots are distinct, with a break between the red and the white hair. Some Ayrshires exhibit a speckled pattern of red pigmentation on the skin covered by white hair. Brindle and roan color patterns were once more common in Ayrshires, but these patterns are rare today.

Unfortunately, the horns were not very practical, and today almost all Ayrshires are dehorned as calves.

Ayrshires are medium-sized cattle and should weigh over 1200 pounds at maturity. They are strong, rugged cattle that adapt to all management systems including group handling on dairy farms with free stalls and milking parlors.

Ayrshires excel in udder conformation and are not subject to excessive foot and leg problems. Few other breeds can match the ability of the Ayrshire to rustle and forage for themselves under adverse feeding or climatic conditions.

Ayrshire cattle will do better under pasture conditions than will the other major dairy breeds and , when pastures are poor, they need less grain to keep them in air condition (C.H. Eckles, Dairy Cattle and Milk Production, 1923).

The ruggedness of the terrain and the unfavorable climatic conditions of their native land led to the selection for those points of hardiness that adapt them to less than ideal conditions. These traits make Ayrshires outstanding commercial dairy cattle

The typical cow is an alert, vigorous animal showing strong character and mild temperament with good feet and legs. Skin is of medium thickness, pliable and soft with fine silky hair. Bone structure is fine and flat, being proportionate to body weight.

Noted for its strong udder formation - a characteristic which has helped the breed win many Interbreed Dairy Championships. Ideally, the udder is long and wide being deep but not pendulous or fleshy. It is firmly attached with a well defined central ligament and strong fore udder attachment blending smoothly into the body. Teats are uniform and evenly placed, being ideally about 6.5cm long, yielding milk freely.

During the Twenties and Thirties, many Ayrshire herds were established near cities. Some of these farms bottled and distributed their own milk. In the late Thirties, the Ayrshire Breeders Association established the Approved Ayrshire Milk Program. The program served the purpose of promoting Ayrshires by promoting their milk. To qualify, a herd had to be comprised entirely of Ayrshires, and the herd owner had to maintain the highest health standards. Promotional materials from the time stated that Ayrshire milk had a better flavour. It also emphasised the unique composition of Ayrshire milk and made it more healthful, especially for children and babies. The promotional literature recommended that mothers give their children Ayrshire milk to be sure that they grew up to be strong and healthy.

Economic milk production is the principle aim of any dairy farmer where the inputs to the herd have to be in balance with the milk each cow produces, and this breed produces margins that keep the business performing profitably. 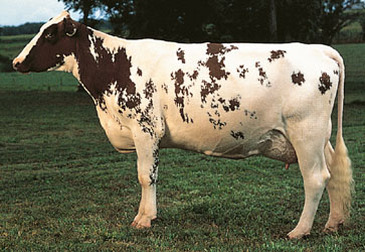 One has to circle the globe to fully realize how widely acclaimed the breed is in other countries. In fact, it can truly be said that the sun never sets on the Ayrshire World.

The adaptability of the Ayrshire cow is demonstrated by her ability to produce at high levels in varying climatic conditions.

The Ayrshire breed is hailed from Finland, which is the farthest north agricultural country in the world, through several African countries to the very cold south of New Zealand, where winter housing is not practiced. Fourteen countries were represented at the 2000 Ayrshire World Conference in the U.K, indicating that the interest in the breed and the optimism for its continuing progress.

In the U.K, the Ayrshires are always prominent in Inter-Breed competitions and have won the coveted "Bledisloe Trophy" on several occasions.