The Belgian Blue's extremely lean, hyper-sculpted, ultra-muscular physique is termed, "double-muscling". The double-muscling phenotype is a heritable condition resulting in an increased number of muscle fibres (hyperplasia), instead of the (normal) enlargement of individual muscle fibres (hypertrophy).
​
This particular trait is shared with another breed of cattle known as Piedmontese. Both of these breeds have an increased ability to convert feed into lean muscle, which causes these particular breeds' meat to have a reduced fat content and increased tenderness.  The Belgian Blue is named after their typically blue-grey mottled hair colour, however, its colour can vary from white to black. 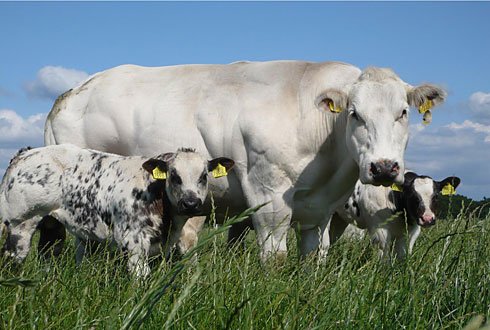 Apart from the "pie" character present in most coloured animals, three colour types are typical for the breed: all white, blue (pie-blue) and black (pie-black)

​However, similar to the Holstein breed or Aberdeen Angus, one can see red coloured Belgian Blue animals - individuals with red factor. It is not too widespread, as in Belgium are not such coloured animals entered into the Herd-Book. They may be carriers of the gene, and thus between the current holder of breeding bulls of the gene found. 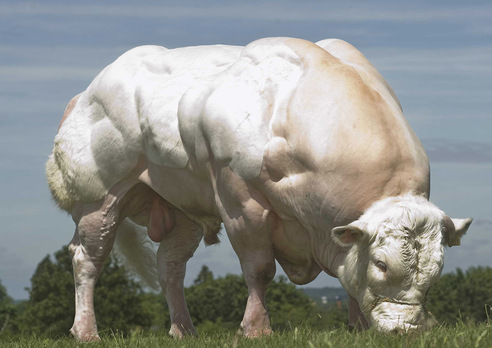 The Belgian Blue breed has been selected by the breeders to satisfy the consumer's expectations. The breed is not only characterised by the quantity of produced meat, but also by its quality. Its high nutritional value is determined by 4 main elements: the meat is rich in high biological quality protein, in vitamins B3 and B12, in iron and zinc, both being in an easily assimilated form. The Belgian Blue meat is recommended by doctors and dieticians. Indeed, it contains less cholesterol (+/- 45 mg/100g) than skinless chicken meat (+/- 62 mg/100g). Moreover the BB meat contains on average 5% fat, that is to say, 2 to 3 times less than the meat produced by other breeds. Its lipid composition is characterised by a good fatty acids balance; fat of such quality is not unhealthy. The meat is very tender because of the finer fibres and a lower percentage of tough connective tissue. Belgian Blue meats require about 1/3 less cooking time than standard beef.
​
Belgian Blues offer consumers exactly what they want: naturally lean, tender and tasty meat, produced with respect for the animal wellbeing and the food safety. 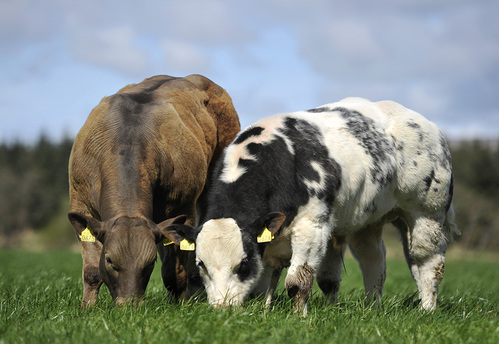 Preliminary results indicate that Belgian Blues are excellent candidates as terminal sire breeds provided producers are compensated for carcass and meat value. They produce 5-9% higher percentage retail product than other sire breeds with meat palatability similar to Angus and Hereford sire breeds.  Using a purebred Belgian Blue bull over your herd the Belgian Blue bull will place more weight and muscle into the frames of your calves.
​

Text by Iris Kolkman
Around the 1990‘s it was discovered that the extreme muscularity characterising the Belgian blue breed had its origin in a mutation of the myostatin (mh) gene. Myostatin is a member of the TGF superfamily of growth and differentiation factors (McPherron and Lee, 1997). In cattle, this gene has been mapped 3.1cM from microsatellite TGLA44 on the centromeric end of chromosome 2 (Grobet et al., 1997). In conventional animals, skeletal muscle growth is repressed by myostatin. A specific mutation in the mh-gene causes inactivation and gives rise to ―muscular hypertrophy‖ resulting in an increase in muscle mass of about 20% (Grobet et al., 1997). This increased muscle mass is created by an increase in the number of muscle fibres (hyperplasia; Grobet et al., 1997; Bellinge et al., 2005) rather than an increase in their individual diameter. The hypermuscularity in the DM-BB breed is due to a deletion of 11 nucleotides (Grobet et al., 1997), which has been mapped to the centromeric tip of chromosome 2 under a recessive model, suggesting an autosomal recessive inheritance (Charlier et al., 1995). 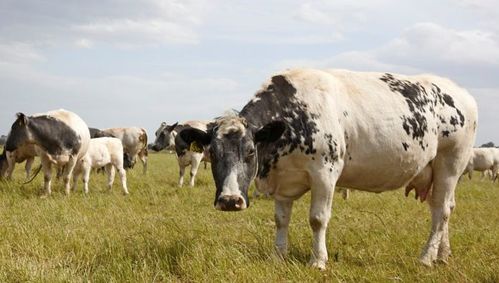 The Belgian Blue is gaining popularity as a beef breed around the world, that is why we see Belgian Blues in France, the Netherlands, Great Britain, Ireland, Denmark, the USA, Canada, Brazil, Australia, New-Zealand and the Czech Republic.

The breed is perfectly suited to a great diversity of soils and climates encountered in its international expansion. Its very calm temperament and its docility are also very much appreciated. Due to its exceptional qualities in crossing and full blood breeding, the request for breeding stock is constantly increasing worldwide.