The only beef breed in the world created through a well documented crossbreeding programme with the aid of objectively recorded performance data.  Visual evaluation according to norms for functional efficiency are also strictly applied.

The Bonsmara is a cross breed of cattle known for its high quality beef. Originating in South Africa as a scientific experiment of professor Jan Bonsma, the Bonsmara was created after many criss-cross matings consisting of 5/8 Afrikaner, 3/16 Hereford and 3/16 Shorthorn animals

No other individual has contributed so much to cattle breeding as professor Jan Bonsma, the father of the Bonsmara breed. The outcome of this scientific experiment is a cattle breed that incorporates the hardy Afrikaner, crossed with a European breed (Hereford x Shorthorn), called Bonsmara (from Bonsma and the research station Mara).

Any breed can survive and produce under ideal conditions. It is only when drought strikes and fertility and growth is influenced that an animal is put under pressure. With our typical African climate, parasite-related illnesses and diseases are another risk for cattle farmers. The Bonsmara was bred to excel even under these harsh conditions and rough climates 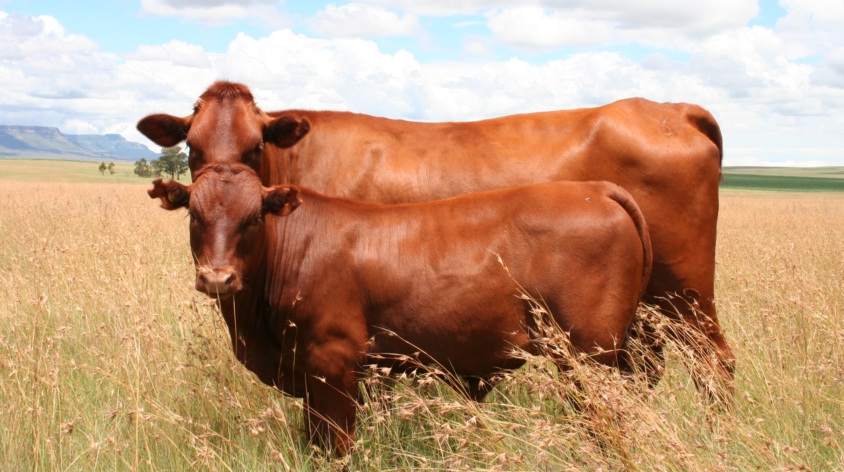 Strict selection for economical factors such as fertility, milk production, growth and adaptability are still applied and are a contributing factor to the reality that Bonsmara proudly succeeded in becoming the strongest and most professional administrated beef breed in South Africa in less than 25 years. Bonsmara, the most prominent of beef cattle in South Africa

Bonsmara's unique composition combined with decades worth of careful and purposeful selection, is giving the breed a firm foothold.

African cattle breeds are well adapted, hardy and can survive with very few inputs, but their reproduction, production ability and the meat they carry often fall short.  This is where the Bonsmara, with its large variety of types within the breed, can improve those herds.

Good adaptability on the veld

• For more cost effective production off the veld. Bonsmara was the first breed to inspect cattle

with their production records. All Bonsmara cattle are inspected at breeding age and any not

Well adapted Bonsmara animals can be identified by the following:

• As a result of intensive selection, calves are produced off the veld at very low cost.

• Good milking ability – Due to this factor, high weaning masses are attained.

• Bonsmaras round off very well (in feedlots and on the veld) with best grades at a young age.

• Bonsmara are docile animals, easy to handle and as a result require less labour.

• Bonsmara plays an important role in any crossbreeding programme. 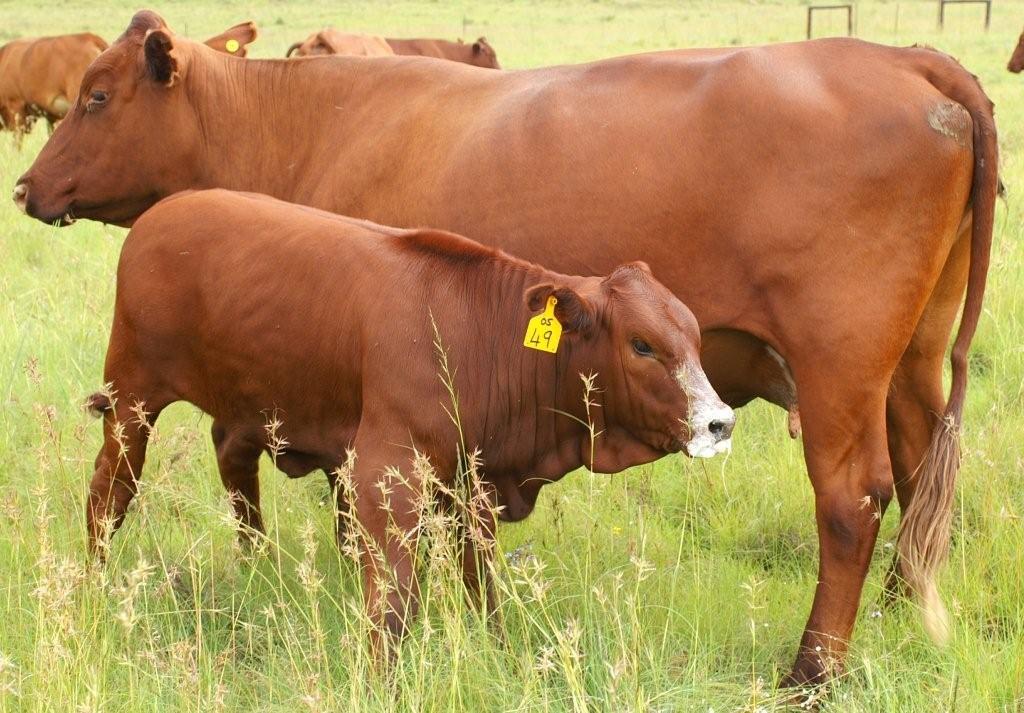 The Bonsmara system is unique and the strict implementation thereof with a competent staff component contributes largely to the position of the breed in the beef industry.

The System relies on four factors:

This is exactly what Bonsmara SA and all its breeders are achieving.  For the first time in Africa, through the use of the latest beef science technology - genomic breeding values - we are not only improving the quality of our stud animals, but we are delivering a better product to the commercial breeder to help them increase their profits.

The Bonsmara breed has taken the lead with the release of the very first Genomic BLUP breeding values for beef cattle in Africa.

By including the genomic profiles of females with a significant influence in the breed, sex-limited traits, only measurable on females, could be linked more accurately to the genomic differences among animals in the breed. 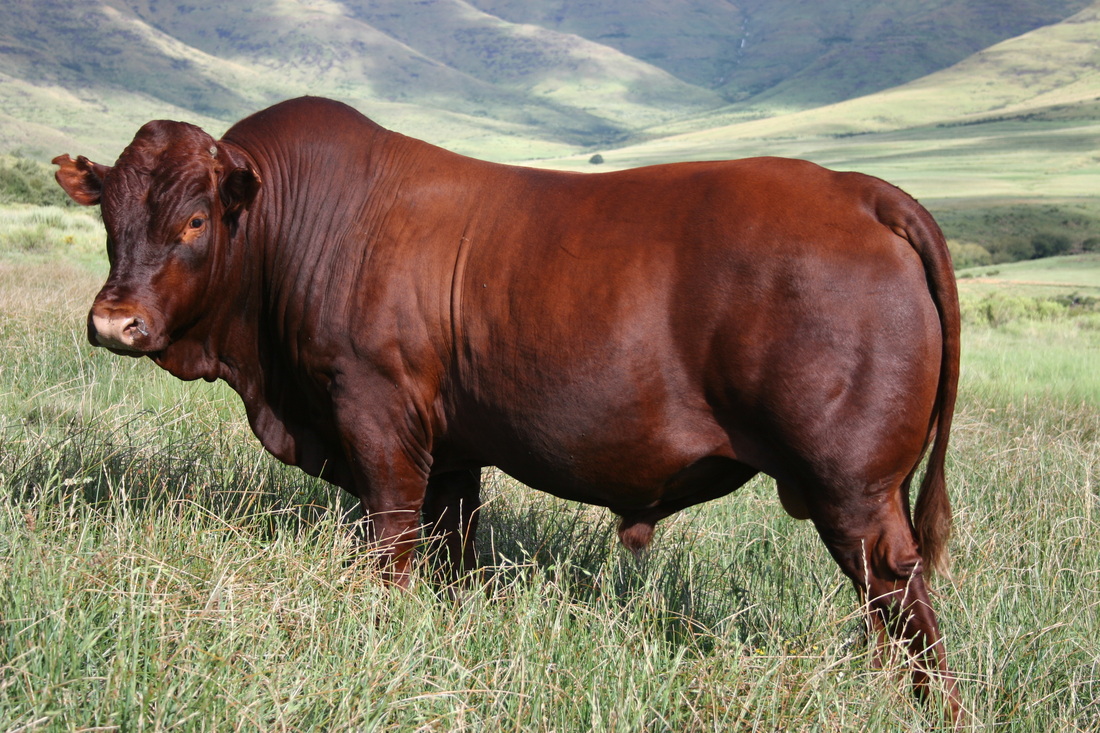 50 Reasons why you should breed with Bonsmara

Bonsmara cattle have been present in Brazil for the last 15 years, and in the meanwhile the genetics have also spread to Argentina, Paraguay, Uruguay and Colombia.  In addition, there are sizable Bonsmara herds in both Australia and the United States.
​

Namibia:
In its almost 40 years in Namibia, the Bonsmara has become the second largest cattle breed (numerically) in the country, showing the most rapid growth over the last decade.

Zambia:
The first registered Bonsmaras were imported to Zambia by the Mulders family in 1994, and the Alexswill Bonsmara stud was established near Kalomo.  Over the years, the breeding objective was to breed fertile, medium-framed animals that can make a positive contribution to the beef industry in Zambia

Mozambique:
Bonsmara can adapt and thrive anywhere in Africa.  Experienced farmers recommend that they only move freshly weaned heifers weighing up to as little as 180kg.
Nosa Bonsmara stud and a commercial herd of purebred Bonsmaras.  In his view there is enough variation within the Bonsmara breed, making crossbreeding unnecessary.  When comparing the calves of their purebred animals to crossbred calves under the same conditions, the Bonsmara perform well.