"The Boran is hardy, acclimatizes easily and with execellent fleshing qualities as proved in the results of carcass contents"

As revealed by O.Hanotte at ILRI, they have shown that the Boran genome contains three distinct genetic influences. Other than the Zebu influence (Bos indicus), there are influences from both the Near East-European Bos Taurus as well as a distinct influence from native African Bos tarus. The predominant influence was however from the Zebu. 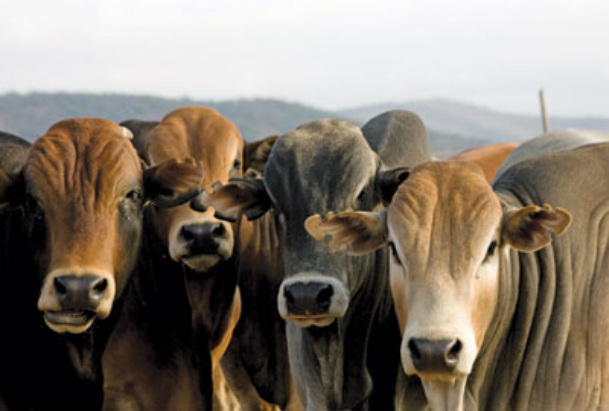 1. The genetic composition of the Boran is unique,making it your best choice for cross breeding
European Bos Taurus - 26%
Bos Indicus - 64%
African Bos Taurus - 12%

2. The Boran is the mothering cow of Africa
The Boran cows have very good udders with well-formed teats and she produces enough milk to wean calves that weigh more than 50% of dams weight at weaning. Their good mothering instinct provides a deterrent against predators. This trait also generates an excellent survival rate of the calves. She produces small calves at birth, male calves average 28 kg and female calves average 25kg. Calving problems hardly exist.

3. Longevity
It is quite normal for a 15-year-old cow to be sound mouthed and it is also on record that a 16-year-old Boran bull is still producing high quality semen for artificial insemination.

4. Fertility
It is acknowledged that the greatest attribute of the Boran is its fertility. Even under harsh conditions the Boran cow will continue to breed and rear calves and do this without punishing herself. One explanation for this high fertility is that the cow has relatively low body weight loss over the suckling period,thereby maintaining a good condition, thus able to conceive again.

5. Disease Resistance
A loose but very motile skin with a very short covering of hair and a high secretion of an oily substance makes the Boran a less desirable host for ticks and flies. This together with thick eye banks with very long eyelashes and a long tail with a big well-formed twitch all protect this indigenousness breed against insects.

6. Temperament
Boran cattle are recognized as being generally, quiet, docile and easy to handle. This trait has developed over many generations of cattle living close to man.

7. Carcass Quality
Trials in Nebraska, U.S.A, shows that the Boran and its crosses score consistently better than other Zebu Breeds for meat tenderness, carcass marbling and rib eye area.

8. Herd instinct
The herd instinct of the Boran makes it easy to manage in bush country. The strong herd instinct makes it almost impossible to steel a single animal out of a herd, thus making an attempt to steel them a very difficult task.

9. Good converter of roughage into good quality beef.
The Boran is a breed that is successfully fattened of the veld with no energy supplement. The Boran is also a good browser and under difficult circumstances it has the ability to stay in a good condition.

Through DNA sampling Hanotte et al have analyzed the genetic make-up of the Boran and it consists of the following genetic proportions:

The Boran developed in Eastern Africa and the main Boran hotspot was the Borana plateau in Southern Ethiopia. That was a point where all the different breeds migrated through to their various destinations in Africa. The Boran developed into the dominate breed of Eastern Africa and especially in Kenya, where the Kenyan Boran Cattle Breeders' Society (BCBS) have bred the "Improved Boran" since the turn of the century.

"While the Boran breeders have greatly improved the beef conformation of their animals, they never lost sight of the important qualities of the indigenous Boran" to quote the BCBS. As far as can be determined this is the only breed in Africa (and therefore the world) to have this specific combination of genes. It must be properly understood that the Boran is a breed that had it's last infusion of "new" genes in 700 AD.

The Boran is therefore NOT a synthetic or compound breed that have been crossbred in the last few decades. It has been bred as a pure breed for 1300 years. The importance of this to the commercial breeder is that the Boran will have much stronger hybrid vigor than modern compound breeds.

General Appearance
The Boran is a medium framed animal with good muscling and weight for age
The body composition is in perfect balance
There is a much bigger difference between the size of the cow and that of the bull than in other breeds
Bulls are large and masculine while cows are smaller and very feminine
Both sexes display typical Boran Traits (Hump, capacity, skin, muscling, head, mouth, skin fold under the neck, condition, tail etc.)

Head
Compact and wide between the eyes
Prominent thick eye banks
Ears are relatively small with short hairs
The mouth is wide and the bottom jaw strong and deep with strong lips
The eyes, ears, mouth and nose are well pigmented
The head is well muscled and appears slightly convex when viewed from the side, this is due to the muscles above the eyes while the nasal bone is dry with no flesh

Neck
Deep and compact
Good attachment front and back
Bulls necks are strong thick, well muscled and darker in color
The prominent loose skin over the neck runs down and full over the chest
Shoulders
Deep, wide, well muscled and sturdy attachment
Fertile cows shoulders are fairly loose

Hump
Straight above and in line with front legs
Rounded
Well developed
Good attachment to body
Back and Loin
Long, wide, strait, strong and well muscled

Chest and Mid Piece
Wide and deep
Well filled behind shoulders and elbow
The ribs are well formed and deep leaning towards the rear of the animal. When viewed from behind it must not appear round or flat sided.
Stomach has got tremendous capacity (length, depth and width)
Deep flank
Viewed from the side the mid section appears square

Hind legs
Must be wide, strong with good angles (no straight hocks or sickle hocks allowed)
Must not be to fine or course of bone. The bone of the leg must be similar to that of the rest of the body.

Pastern and Hooves
Pasterns must be strong not to straight up or with to much of an angle
The Hooves must be symmetrical and straight up on the inside, short, deep at the back and fit well against each other with good pigment
The weight must be carried equally by both hooves
The front legs must be straight

Skin and Hair
The skin must be thick, loose and maneuverable, preferably with good pigmentation
The skin folds must not be over done and the skin must be covered with short glossy, oil rich hair

Udder and Sex organs
The udder must be well developed with pigmented medium size teats
The four quarters in good proportion to each other with good attachment of the udder to the front and well up at the back.
The vulva is well developed and pigmented
The scrotum is large with a thin attachment and must not hang lower than the hock
The testis must be of even size and the scrotum is soft and smooth with short hair
The scrotum must not be twisted and well pigmented especially on the lower parts

Temperament
The Boran is calm, docile and easy to manage

Variable environmental conditions and other factors lead to a wide range in weaning weights, however the leading Boran herds report the following averages at eight and half months of age: - 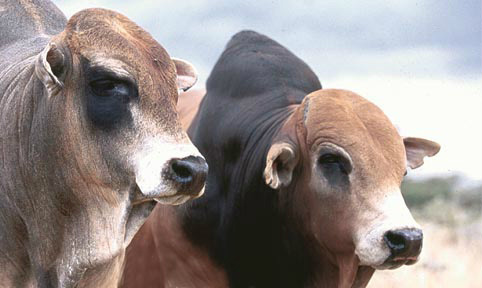 There are good reasons for the Boran being the breed of choice for the cow-component in two-way crossbreeding systems. Kenyan commercial ranchers have long recognised the Boran cow's prolific qualities and small size compared with other Zebu and composite breeds.

Furthermore, by crossing with an appropriate Bos taurus sire, any desirable beef or dairy F1 combination can be custom-made. The genetic completeness of the Boran cow simplifies herd structure; making complicated three-way, terminal or rotational systems unnecessary. The two-way cross is flexible in the face of market demands - the type of sire can be changed according to the product needed.

Crossing the Boran with a dual-purpose breed such as Red Poll and Brown Swiss gives the option of breeding females for dairying and steers for fattening. Such crosses exhibit maximum hybrid vigour.

Robert B. Tate, Brahman breeder, San Antonio, Texas: -
"The prize winning 'get' was outstanding and probably one of the very best 'gets' I have seen in any other country.
The top animals in the Boran classes are outstanding individuals. Since the Boran breed is hardy, already acclimatised to this area and with excellent fleshing qualities as borne out in results of carcass contents, they should remain the outstanding breed of this area. Borans should lead the way in cross breeding which is becoming very popular in all countries in order to obtain this breed's vigour for more weight for age and earlier maturity which will bring more money to the producer."

John Yelland, Hereford breeder, Australia: -
"In selecting both Borans as Supreme Champion and Reserve, we felt that they were showing more muscle development than other breed champions"

Douglas Ralfe, Boran Judge, Natal, South Africa: -
"The drought being experienced in Africa made clear which type I had to choose in the show ring. The hundreds of cattle we saw were very good, with a high percentage I can only describe as excellent. Africa has always had severe droughts from time to time and it was remarkable to see cows in fair condition with very well nourished calves, in extremely hard and dry conditions, despite being kraaled every night which is most taxing."

Bernard Irungu, Daily Nation, 3rd December, 1998: -
"The Boran is the future of pastoralist communities, because it can still tolerate the harsh rangeland conditions better than any cross-breed."