Braunvieh is not a crossbreed or a new breed developed using two or more breeds. On the contrary, Braunvieh may be the oldest pure breed on earth, with records dating back to 800 BC. Recently, archaeologists have found cattle bones among the ruins of the ancient Swiss Lake Dwellers similar to those of the present day Braunvieh. This would date these cattle in the region to the Bronze Age. This is the large docile breed associated with the scenic Swiss Alps. Development of the breed came into its own in the 18th century in the mountain valleys of Switzerland and production records on milk and meat performance were established in the 19th century.

Today, roughly 40% of the cattle in Switzerland are Braunvieh and they have spread throughout the world. Due to their high performance and adaptability, Braunvieh are used in all major countries of the world. Braunvieh are found in over 60 countries extending from the Arctic Circle to the tropics at altitudes varying between 0 and 12 500 feet. World population of Braunvieh is over 7 000 000 head. Herdbooks are been kept by breeders' associations in 42 countries. 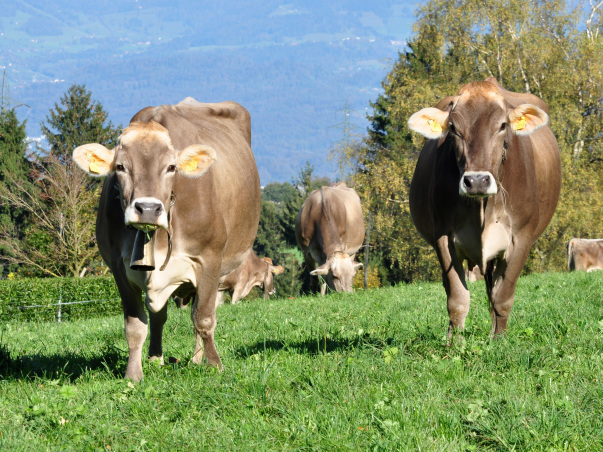 Braunvieh is a German word which translated into English means Brown Cow. Their hair is various shades of brown, predominately mousy brown, but ranging from light brown with gray to very dark brown. The border of the muzzle is very light, as is the poll, and often a lighter coloured dorsal sprite is seen. The udder and inside of the legs and underline also being the lighter shade. A darker, smokier shading is often evident around the shoulders and neck compared to the rest of the body. The switch of the tail is dark brown to black. The skin is pigmented, the muzzle is black, and the hooves are dark and very hard.

The Braunvieh is a very docile, long-bodied, well muscled animal with correct feet and legs, due to generations of natural selection in the Swiss Alps.

Braunvieh are know as a balanced breed, possessing body conformation for optimum physiological performance. This and the fact that their hair is sleek and fine in warm weather and can grow heavy in response to extended cold weather makes Braunvieh adaptable to different environments.

The physical characteristics that this breed is rapidly becoming noted for is the carcass traits that are needed to carry the beef industry into the next century. Braunvieh sired steers have consistently hung up top carcasses.

This is the breed to lead the beef industry into the new millenium. Braunvieh put it all together: Maternal, muscling, marbling and performance.

Colour
Colour is mid grey brown with distinct creamy white ear hair and muzzle. Males usually darker (not black) with cream areas not so pale as the female. The under body and legs are usually paler than the upper body. Young calves are sliver or grey. Consideration must be given to factors influencing the coat such as gender, climate, season, health, age and genetics. Noting these factors, the ideal coat in a mild climate should be smooth, straight and medium length. The tail has a substantial size brush being brown or darker than the main body colour.

Skin
The skin can be thick but still pliable. Nose, tongue and eyelids are grey to dark grey with remaining areas grey or tanned. Dewlap is more apparent on the neck than the naval.

Head
The breed is naturally horned. Polled or scurred animals are acceptable in the Herdbook, and dehorned, polled, scurred or horned may be shown without prejudice. The ears are larger and set more at right angles to the head with a slight droop but alert. The eyes are large and dark with a well developed eyebrow. Overall head length is medium and not extreme in width. Muzzle is broad with large open nostrils and strong even jaw.

Neck
The neck is medium in length. A dewlap is a common characteristic in males and females and indicates skin mobility with adaptability to climate extremes.

Chest
The chest should be broad and deep. Shoulders evenly laid into the body and not extending above the spine.

Body
Should show good spring of ribs and depth. A moderate navel dewlap is acceptable. Back should be strong and level to hip with a slight slope from hip to pins. Wide at pins and rump broad with well developed muscle on rump and thighs.

Feet
May be large but maintaining correct angle and good depth of heel while not being either turned in or out. Hooves are dark grey in colour with no light stripes. In general, females need to appear feminine with medium muscling and particular attention to sound udder structure and capacity for which the breed is noted. Males must be masculine with well developed muscle and reproductive organs. 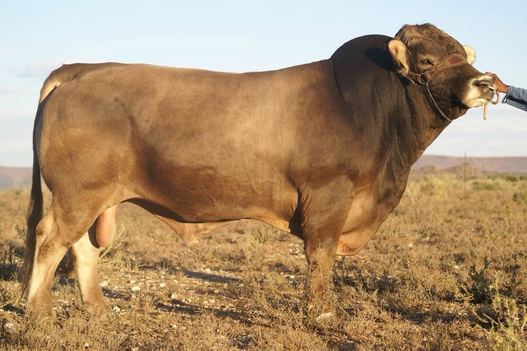 To the commercial cattle person, herd fertility is the most important profit potential production trait. A high percentage calf crop is essential in today's beef industry for any cow / calf operation to have the opportunity to show a profit. Research has shown that on a commercial basis, herd fertility is at least five times more important that the growth traits for herd profitability.

Braunvieh bulls are noted for their scrotal and testicular development at a young age and are capable, fertile breeders at 12 to 14 months of age. "Four thousand Red Angus cows exposed to Braunvieh bulls the past four years average 7 percent higher conception rate than the average of the other herds exposed to bulls of other breeds." said Tom Woodward, the managers of Broseco Ranches, Omaha, Texas. Broseco Ranches operate in northeast Texas and run a total of about 6 000 mother cows.

Another documented example of Braunvieh fertility comes from Texas A & M Research Centre, Uvalde, Texas, where as part of a research project, the centre turned out five Braunvieh bulls and five of another heat-tolerant breed with 266 crossbred cows. When the calves were DNA verified to their sire breed, the Research centre found that 68% of the calves were Braunvieh sired. 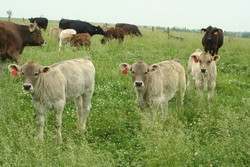 * Calve unassisted on a regular basis, producing a calf every 365 days
* Convert forage to milk, provided through a sound udder and teats in sufficient quantity to produce a heavy, vigorous calf at weaning

Braunvieh and Braunvieh cross females are excellent mother cows. They have an inherent ability to re-breed regularly, combined with their sound udder attachment and small, well placed teats that provide ample milk to their calves over the 200 to 250 day nursing period. This maternal ability results in sound, heavy calves at weaning.

Once more, putting Braunvieh genetics in your crossbreeding program can provide hybrid vigour at the following rates:

Full Blood or purebred Braunvieh can be horned or polled. Full Blood Braunvieh are almost always horned, except when a genetic mutation takes place where a polled animal is produced from the mating of two horned animals.

The polled gene is dominant to the horned gene and thus breeders are able to propagate animal expressing the polled factor.

Many breeders have bred up to purebred status using polled animals as the originating animals crossed with full blood Braunvieh. Following breeder's original cross with polled animals, many breeders selected and saved only polled animals for their breeding program. The result is that there is now a sizable number of both homozygous and heterozygous polled Braunvieh available. 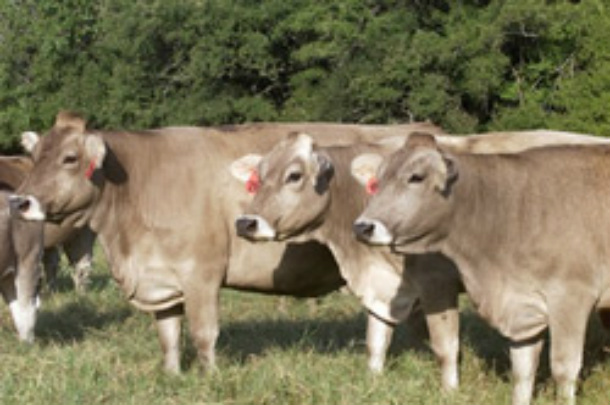 Braunvieh genetics in a commercial cow / calf operation continue to make positive input towards profitability for those firms incorporating Braunvieh in their program.

The superiority of Braunvieh genetics for producing more pounds of marketable weight was first verified at the US Meat Animal Research Centre where Braunvieh cross females produced 4% more calf weight per cow exposed than their nearest competing breed cross.

Braunvieh cross females produced 5% more weaning weight than the traditional Hereford-Angus cross females and from 4% to 11% more weaning weight than any other Continental cross females. Economically, any commercial cow-calf operation that can increase the pounds of calf weaned per cow exposed by 4 to 11% has a tremendous economic opportunity to increase the herd's profit potential. By combining this calf weight-per-cow advantage with the 7% increase in conception rate from the use of Braunvieh bulls, the economic advantage for using Braunvieh genetics becomes significant. The following chart shows Braunvieh's advantage for calf 200 day weight per cow exposed.