The British White is one of the oldest breeds in Britain and these animals were previously known as Park Cattle. Originating at Whalley Abbey in mid-Lancashire, the original herd being dispersed in 1697. They spread from this area and eventually became concentrated in East Anglia where most of the herds are still centred, although new herds have been established in many other parts of the country 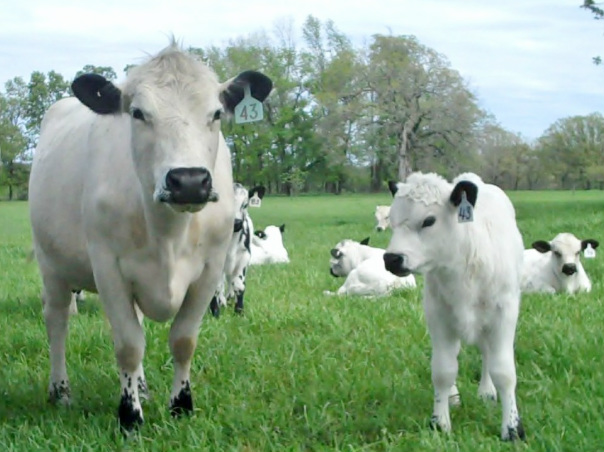 1) A full visual description of the breed is as follows: White coat on blue or dark pigmented skin. Black points, viz muzzle, nose, ears, eyelids, teats of cows, rudimentary teats of bulls, legs with a splash of colour or spots of colour on the front of each fetlock, black hooves. Black tongue is desirable. Some cattle appear in the breed with red points, but still retain the foregoing markings. The Society makes no distinction on colour other than noting the red pointed animals. The body is usually marked with a splash or spot of colour on the neck, dollar spots on the flanks or back and quite frequently breech marks.

Mature cows weigh to 650kgs and mature bulls to one tonne.

2) Milking ability is a strong point in favour of the breed. British Whites were for many years an important feature of English dairy herds where regular flows were required with suitable butterfat levels. They have well set udders with the minimum fatty tissue and medium sized teats that hold their shape. There is less likelihood of unsuckled quarters and generally there is a freedom from associated problems.

3) Excellent mothering ability by individual females, also incorporating the nursery system of protecting groups of calves by a guard cow whilst the remainder of the herd grazes. Although this characteristic is known in some breeds of cattle, it is highly developed in British Whites and is of great benefit in areas where wild dogs or other predators are a concern.

4) Naturally polled. Being a dominant gene this feature is an advantage in mixed breed programs.

5) The black points and pigmented skin eliminate the problems of eye cancer, sun-burnt or snow-burnt teats and photosensitisation is unknown in the breed.

6) British Whites have a high degree of heat tolerance and frequently sit or lie in the sun whilst other cattle seek a shady position. Their ability to withstand above average heat points to the breed being ideally suited to most climate conditions.

7) The strong black hooves hold their shape and housed stock seldom if ever require hoof paring; likewise an absence of hoof problems in the field. The breed is also known for its free movement and walking ability.

8) A healthy breed, having resistance to tuberculosis and viral pneumonia. No apparent tendencies to arthritis (U.K) and a low incidence of calving difficulties.

9) Excellent foragers with an ability to convert lower grade pasture to maintain body weight and rear calves. Recent bull trails in Britain and steer trails in the USA show the British Whites holding their own against other breeds and in most instances have been ahead in weight gains and feed conversion ratios. Low back fat measurements combine with high quality fleshing is the feature required by cattle breeders, butchers and consumers. The breed meets these requirements.

10) The British White is prepotent in a number of areas, one being colour marking ability. A high incidence of true colour occurs in cattle with less than 25% of British White blood. This characteristic is of great benefit in regions where cattlemen prefer white haired stock for sun reflection with the added advantage of the pigmentation.

11) Longevity is a feature of the breed combined with excellent breeding records. The instance of twins being one of the extra benefits. Various government and private bodies have sought to increase twinning rates in different breeds of cattle with mixed success. The British White is one of the few breeds in the world having a natural high percent of twins per herd average.

12) Good temperament and showing a high degree of intelligence. British Whites in general are excellent to handle in the field or yards and at close quarters. Breeders wishing to prepare stock for shows will appreciate these attributes when feeding and handling under stall conditions

If it's a beef cow, why worry about milking ability? Good question, and there is a logical answer. A calf will grow and add weight based upon its mother's ability to produce ample quantities of rich milk. Anyone who has ever seen a herd of British Whites knows that an abundance of rich milk is available for the baby calves. British White cows are excellent mothers, and even heifers with their first calf produce much rich milk.

British White cows have well set udders with a minimum of fatty tissue and medium sized teats that hold their shape. It is not uncommon to see 14 and 15 year old cows with udders tightly set and well shaped teats!

The British White breed has a docile temperament combined with a high intelligence. This makes them excellent to handle, which is particularly important when running bulls with dairy or beef herds. They adapt well to a bucket feeding system as well as suckling.

Until the late 1960's, British Whites were mostly kept as dairy cattle. Official milk records show the breed to have been very acceptable in this role. In the 1930's average yields of up to 1 700 gallons more recently. As herds gave up milk production some were dispersed and others declined until in the mid 1970's only the Hevingham herd in Norfolk retained any considerable number of pure cattle. The old-established herds at Woodbastwick, Kelmarsh and Faygate also played important parts in the breed's survival. Today they are kept almost exclusively for beef production.

Today most purebred cows are kept as single sucklers although many are capable of rearing two calves well. The British White cow's ability to convert milk for her calf is shown by pedigree calves averaging 1.07kg daily live weight gain to gain to 168 days and crossbred calves by a British White bull out of British White cows averaging 1.13kg to 176 days with no creep feeding. The breed's hardiness and soundness lead to cows that continue to breed regularly to a great age, there are cows in their late teens still breeding well and rearing good calves.

They have above average milk and mothering ability, notable ease of calving and are tick tolerant. 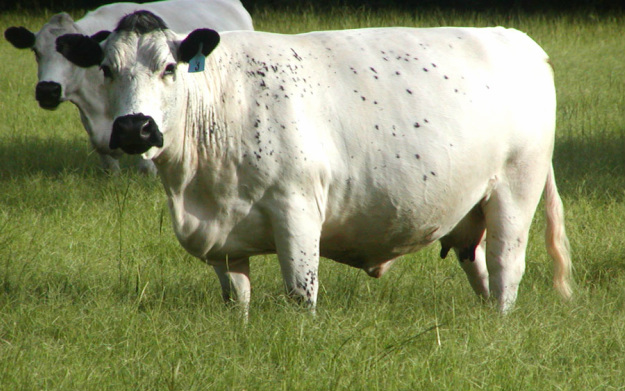 Today's consumers do not want fat or tough meat for a variety of reasons, some of these being weight consciousness and the movement toward low cholesterol content. At the same time, they do not want to sacrifice taste and tenderness. The British White meets all of these requirements.

The meat is very lean and tasty. A thin rhine with a light flecking of marble sets off the obvious quality of steak or roast. Hamburger is practically fat free yet full of flavour!

Many thanks to J.West Cattle Co for all the assistance with this page, links, photos and support. Its people like you that make a breed GREAT