Universal Breed of the Future

The Devon is an ancient breed of cattle from the south western English county of Devon. It is a rich red or tawny colour, and this gives rise to the popular appellation of Devon Ruby or Red Ruby, also used as a marketing brand. The breed is also sometimes referred to as the North Devon to avoid confusion with the more recently developed South Devon cattle breed which is yellowish brown. 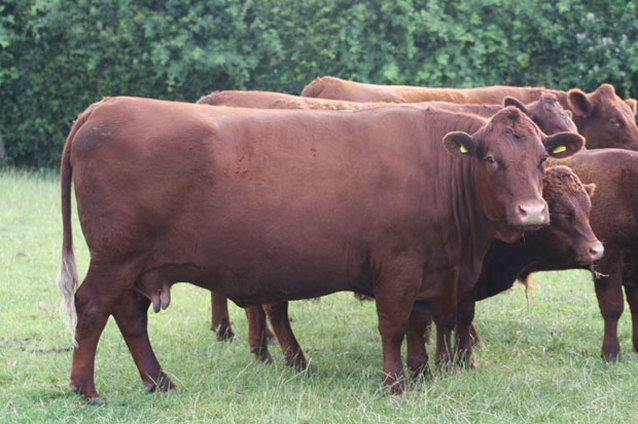 The native home of the Devon is in southwest England, primarily in the counties of Devon, Somerset, Cornwall, and Dorset. The Devon is one of several modern breeds derived from the traditional red cattle of southern England, together with the Hereford, Sussex, Lincoln Red and Red Poll.
​

Devon cattle are red in colour, varying in shade from a rich deep red to a light red or chestnut colour. A bright ruby red colour is preferred and accounts for their nickname, the "Red Ruby". The hair is of medium thickness and is often long and curly during the winter, but short and sleek in summer. The switch of the tail is creamy white.
Mature bulls in good working condition weigh from 1,700 lb (770 kg) to about 2,200 lb (1,000 kg). Mature cows range in weight from about 950 lb (430 kg) to about 1,300 lb (590 kg). Thus, Devons have enough size to be practical and profitable without the handicap of excessive maintenance cost.
Calving problems are seldom encountered although a growing stress on using larger bulls has increased the incidence of difficult births.
​
The functional characteristics of the Devon make them a valuable genetic tool for the commercial beef industry. The breed has long been noted for its fertility, ease of calving, docility, hardiness and ability to adapt to temperature extremes.
Devons are active good "walkers" and are excellent foragers. Their ability to utilize grass and other forages efficiently has heightened their popularity in areas such as southern Brazil, Australia, and New Zealand.
In recent years however, the breed has fallen out of favour, as more rapidly growing continental breeds were in demand by both the farmer and butcher because of their speed of maturity and the quantity of higher-value cuts they produce. However, that meat has always been of a lower-eating quality than that of the slower-maturing grass-fed traditional breeds.

CARCASS VALUE
Of the Devon carcasses evaluated in this country, 96% have met the demands of the most stringent beef retailers. Devons are recognized world wide for producing some of the finest beef off pasture alone.

FERTILITY
It’s not unusual for a top Devon heifer to calve before she is two, and re-breed in 45 days. The top-selling Devon bull’s semen has a live rate of over 90%–compared to the national average.

PRE-POTENCY OF GENETICS
Devon cattle did not take part in the feedlot madness that has had a stranglehold on the American beef industry since WWII. This kept the breed firmly in the hands of Devon breeders who insures the integrity of the breed’s genetics. No breed has a purer genetic base than the Devon.

DISPOSITION
Devon’ historically close relationship with man insures that they are first, and always, docile.

HIDE VALUE
Devon have the thickest hides of any cattle in the world. That means that the Devon cattle have better resistance to external parasites and tolerate weather changes and extremes of temperature.

ADAPTABILITY
The Devon’s robust constitution has enabled them to flourish in the diverse environments of Brazil, Australia Canada Africa and the Middle East. You’ll find Devon breeders from Louisiana and Texas up to Washington and Maine.
​
COMMERCIAL VALUE
Over the years, the Devon breed has retained its moderate frame, foraging ability and carcass merit. If you’re wondering what this means to your operation, results from multiple feedlot studies showed that Devon sired calves gained weight more efficiently and therefore returned a significant dollar advantage over other English breeds.
Additionally as the movement towards sustainable farming continues to grow the Devon’s phenotype proves to be ideally suited to low-input grass farming. Devon bulls grown at a Virginia test station in 2006 averaged a 3.45 ADG over 140 days on grass. Additionally, Devon calves at the same station averaged a 2.25 ADG on grass alone. 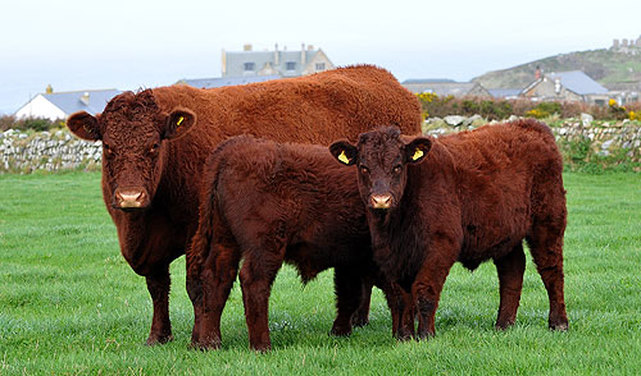