The Mother Breed of Beef

Gelbvieh cattle are a breed with European origins, the first originating in the German regions and alps of Europe. Gelbvieh are a large framed muscular breed not too dissimilar to a Simmental, Charolais or Limousin. They are renowned for having smaller calves which means they have less chance of calving difficulties unlike most other European breeds. Gelbvieh purebreds are traditionally a golden honey red colour, however black purebreds are available and Black Gelbvieh are proving popular with cattle breeders.

The cattle are single coloured in their coat, with fine hair making them ideal in temperate to arid conditions. Gelbvieh are a very adaptable breed and are bred in all climates in Australia and around the world. Gelbvieh are also known for their quiet disposition and docility, especially when compared with other European breeds. 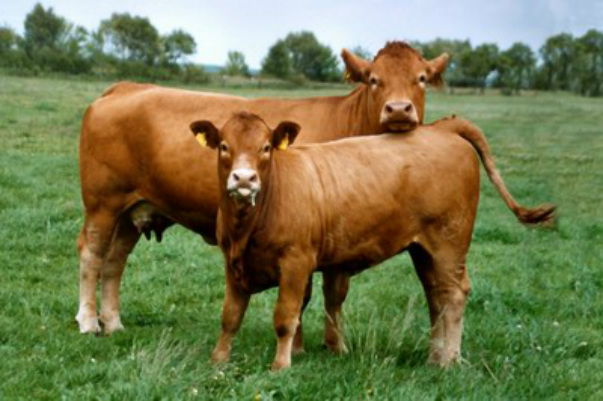 Gelbvieh originated in the southern Bavarian region of Germany in the 19th Century. It was once a triple purpose breed (milk, meat and draught) and was developed from several local strains of 'Red-Yellow Franconian' cattle & Gelbvieh translates from the German, literally, as 'yellow cattle'. The present breed society in Germany was established in 1899.

In 1958, the German government imposed a stringent progeny testing programme on the breed in a deliberate strategy to improve performance in milk and meat production traits. They used AI extensively and applied objective measurement in selection for productivity, maternal characteristics, fertility and calving ease, as well as carcase quality. 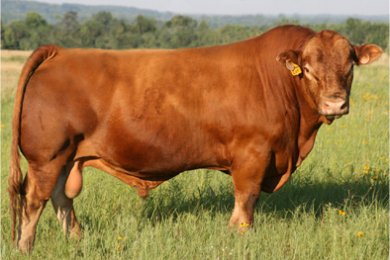 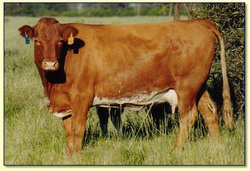 Gelbvieh - the quiet maternal versatile European breed. This statement of fact sums up the uses of Gelbvieh in a crossbreeding situation.

According to industry experts, Gelbvieh is the crossbreeding Continental Breed of Choice, leading to huge financial benefits of hybrid vigour and the positive results of using breed complementarily (matching strengths and weaknesses). The bottom line is that these breeders know that crossbreeding is essential for maximising profitability. The unique genetic package that Gelbvieh offer is no accident. Indigenous to Germany, Gelbvieh cattle enjoy a centuries-old reputation for explosive growth, high fertility and superior milking ability compared with other breeds. In addition the Gelbvieh's quiet temperament and that of their crossbred progeny is unquestioned.

According to the USDA Meat Animal Research Centre Gelbvieh are the only widely used breed that excels in calving ease, milk yield, retail yield, weaning growth and yearling growth combined. In sum, Gelbvieh produce more kilograms of weaned calf per cow exposed than any other widely used breed. Plus Gelbvieh gives you the priceless bonus of the industry's most respected replacement females.

Nearly all European breeds are used as terminal sires. Gelbvieh can no only be used as terminal sires but their crossbred heifer progeny make excellent breeding females as well. Their puberty, fertility and milk production has superiority over other European cross females. This has been established overseas with massive crossbreeding trials.

The term "European" is synonymous with high growth rate, leanness, large eye muscle area and heavy muscling. The Gelbvieh are more moderately frames than other "European's". Of particular advantage over its competitors is the Gelbvieh's puberty, fertility, temperament and milking ability - characters often pointed out as lacking in most other Europeans. This is an advantage not only in calf size but also crossbred cow maintenance.

The main advantage Gelbvieh have over other European cross breeds in any crossbreeding system is that heifers can be retained with full confidence that they will go in calf when required and early. They will calve easily and go in calf again quickly, while providing an excellent milk supply for the fast growing calf.

The Gelbvieh breed is an admirable terminal sire over all breeds of cow, excelling with "British" breeds, such as Angus. Given this it is such a waste to slaughter crossbred Gelbvieh females which are the type of crossbred female the industry is crying out for today.

Gelbvieh is the Continental Breed of Choice based on overall profitability. No other breed can compete with the growth, muscle and maternal power of Gelbvieh. See for yourself why the industry experts give Gelbvieh the nod.

* A 1,000-pound cow produces about 10 tons of manure a year!
* The hide from one head of cattle (one animal) can be made into 18 pairs of shoes!
* There are many by-products or secondary products from beef cattle, such as soap and shampoo made from the fat.
* The pancreas and liver of beef animals have been made into medicines
* Hair from cattle is made into paint brushes.
* That Canada fed 3.6 million cattle in 2005. (Cattle that are finished to market weight)
* In 2005, Canada produced 3.5 billion pounds of beef.
* Beef production contributed $25 billion to Canada's economy in 2005.
* Canada produces 3% of the world's beef supply.
* Many food products like Pop-Tarts, M&M's, Cupcakes, Snicker bars, etc. have beef gelatin in them.