The Isle of Guernsey, a tiny island in the English Channel off the coast of France, is the birthplace of the Guernsey cow.

About 960 AD, besieged by buccaneers and sea rovers, the Island came to the attention of Robert Duke of Normandy. He sent a group of militant monks to educate the natives to cultivate the soil and defend the land. The monks brought with them the best bloodlines of French cattle - Norman Brindle, also known as Alderney, from the province of Isigny and the famous Froment du Leon breed from Brittany - and developed the Guernsey. 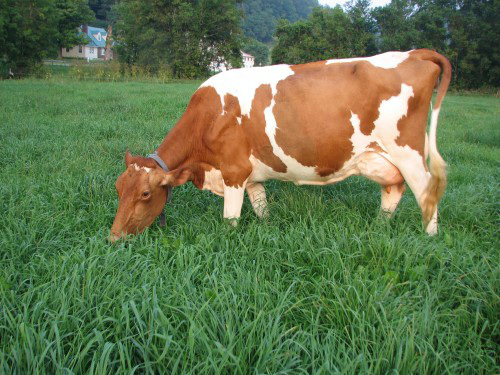 Being of intermediate size, Guernseys produce their high quality milk while consuming 20 to 30 percent less feed per pound of milk produced than larger dairy breeds. They are also known for having a lower projected calving interval and have a younger average age of first calf heifers than the larger breeds. Other attractive characteristics of Guernseys are their lack of any known undesirable genetic recessives and their adaptability to warmer climates.

The Guernsey is also an excellent grazer. She is a cow that is made for pasture-based milk production. Because of her grazing abilities, general disposition, calving ease and ability to efficiently produce milk with less feed than other breeds, she is the ideal candidate for intensive grazing. Dairy producers can realize her profit potential while reducing management costs.

Efficiency
Effective converter of feed to milk products. This medium sized cow requires less feed than the Holstein, yet converts that feed into more Protein and Butterfat per unit of body weight.

Adaptability
Adaptable to any climate, she performs well in southern, northern, hot and cold climates. Her fawn or red and white coat enhances her heat tolerance and reduces heat stress, enabling her to maintain production levels anywhere. Guernseys perform well in both housed and grazing situations. The Guernsey is an excellent grazer and is a cow that has been developed for pasture based milk production. She is the ideal cow for intensive grazing.

Ease of Calving
Research has shown that Guernseys have the lowest incidence of calving difficulty of any of the major dairy breeds. This is witnessed by the fact that there is no need for AI companies to indicate "Calving Ease" bulls in the Guernsey Breed. Trails have shown the Guernseys also calve easily even when crossed with heavier beef breeds.

Early Maturity and Fertility
Guernseys mature earlier and come to profit sooner than many other dairy breeds. Guernseys have a calving interval that is comparable to other breeds and can be bred to calve at around two years of age.

Temperament
The Guernsey is extremely docile. Dairy farmers all over the world confirm that her moderate temperament and disposition make the Guernsey the easiest breed to work with.

High Components
The Guernsey's ability to produce high percentages of protein and butterfat enhances her economic value to processors of manufactured dairy products like cheese, butter and ice cream.

The Cheese Yield
Research carried out in USA has shown that 60% of Guernseys carry the Kappa Casein 'B' gene. This is of real economic benefit to cheese plants, giving a firmer curd, increased volume and better cheese characteristics. Recently a cheese made entirely from Guernsey milk was awarded the Silver Medal at the Royal Melbourne Show, Australia's most prestigious cheese show. Guernsey Milk Products, who entered the cheese, reported that 15.36kg of cheese was made from 100 litres of pure Guernsey milk, whereas 10 kg is all that would normally be expected from "standard" milk in Australia.

The unique qualities of Guernsey milk, especially flavour, have always been recognized. The unique golden colour of Guernsey milk, which comes from an unusually high content of beta carotene, has the potential of adding even more value for producers and consumers. The Cancer Fund of America Inc. recently published information stating that "Diets rich in foods containing Vitamin A, Vitamin C, and a precursor of Vitamin A called beta carotene, may reduce the risk of certain cancers".

The Guernsey is the result of two centuries of continuous breed development and improvement. Today, for example, Island Guernseys are the leading MILK and PROTEIN producers of the British Channel Island populations (Jersey and Guernsey)

The no fuss cow with tremendous potential. The colour varies from yellow to reddish-brown with white patches. The cow has a finely tuned temperament. She is alert and wide-awake but not nervous or irritable. Physically she has good dairy conformation and presents the visual impression of a plain animal bred for utility rather than good looks.

She has an attractive carriage with a graceful walk, a strong back, broad loin, wide rump and deep barrel, and she carries a capacious, strongly attached udder extending well forward, with the quarters evenly balanced and symmetrical. Heifers generally come into milk at about two years of age. The average weaning weight off heifers and bull calves is 75kg. The Guernsey bull has an attractive individuality, revealing ample vigour and masculinity. It has smooth-blending shoulders showing good refinement, strength and even contour. 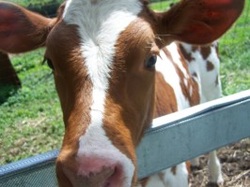 (extract from article by Bill Luff)

It seems that there is a strong demand everywhere for Guernsey cattle, often first time buyers, but it also seems that this is a demand that many of us are finding it very hard to meet. If we believe, as I hope we do, that we have a good product to sell, it follows that we can only advertise this if we are able to produce the goods. No shop advertises goods that it does not stock.

How can we increase the numbers of Guernsey cattle around the world? I recognize that transporting livestock over very long distances can be expensive. We face increasing demands of health and welfare regulations, which I hasten to add, are generally to be applauded, and in addition to this we will all undoubtedly be facing increased costs associated with fuel and environmental issues. I suggest that embryo transfer and semen sales are a real option for implanting new Guernsey populations in remote areas. We must also accept that one of the fastest ways of increasing Guernsey populations is by giving farmers the possibility to grade up from other breeds through supplementary registers. Many successful breeds have done this in the past and we should really look hard at making it easier for this to happen. The constraint of Guernsey Global Breeding Programme (GGBP) means that we should not encourage second release of bulls in the country of first release, but it does not mean that we cannot set semen aside for export to other populations.

Milk from the Guernsey Breed has been known to have different characteristics than the other breeds for sometime. Many people who suffer dairy allergies or intolerance tend not to react to Guernsey milk as it is high (95%) in A2 protein as in sheep and goat's milk and very low in A1 that could have an effect on susceptible people.

The Guernsey cow is known for producing high butter fat, high protein milk with a high concentration of beta-carotene that gives that extra special taste. Guernsey milk is a natural for wholesale, tasty, healthy products that please the discriminating customer. These products are marketed for a substantial premium, because of the uniqueness, quality and taste. The products, which can be manufactured from Golden Guernsey milk, are almost endless. Most will retain the unique Golden Guernsey colour, flavour and nutritional values even after processing. Guernsey cheese for example is unequalled for its unique qualities. 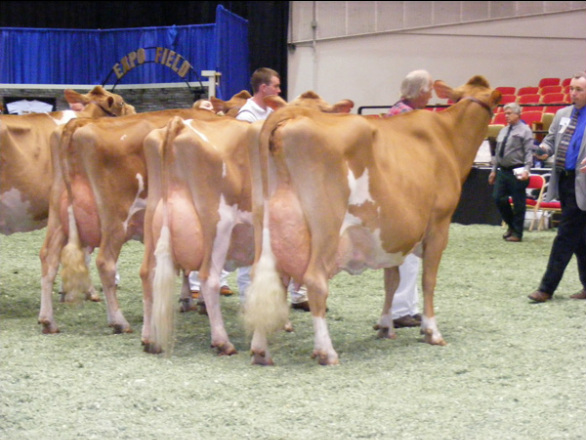