Despite considerable research, nothing definite is known as to the actual origin of the cattle first brought to Jersey Island. Most research workers agree, that the Jersey probably originated from the adjacent coast of France, where in Normandy and Brittany cattle resembling Jerseys are found.

Whatever the correct phylogenetic form of the Jersey might be, it would appear, when analysing the available data, that the domesticated fore-father of the Jersey came from Asia, belonged in all probability to Bos brachyceros, was probably tamed during the Stone Age, some 10 000 years ago or more and migrated to Europe through Central and Southern Europe and North Africa to Switzerland and France. In Northern France some cross-breeding undoubtedly took place between the pure Bos brachyceros and Bos primigenius herds (which mostly came down the North Coast of Europe to as far down as Northern France).

Jersey Island being joined to France until about A.D. 709 by a narrow isthmus, it stands to reason that cattle from Normandy and Brittany were brought over regularly in the early days to Jersey Island and must have played a very important role in the origin and development of the present day Jersey.

All honour and praise must, however, go to the breeders on Jersey Island for having bred and developed this wonderful and outstanding dairy cow on their small island. 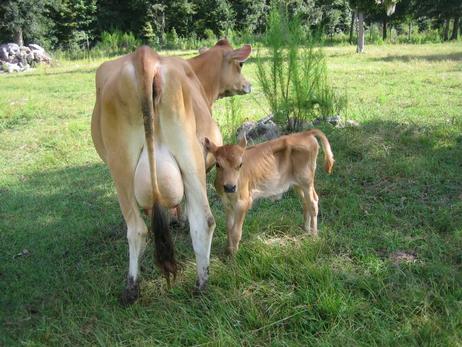 Before she ever enters the parlour— before the first drop of milk hits the bulk tank—it is extremely likely that a dairy heifer already harbours a mastitis infection. Research shows that in many herds, up to 90% of the heifer population freshen with pre-existing intra-mammary infections. At calving or shortly thereafter, these young cows manifest signs of clinical mastitis and serve as a source of infection to the entire milking herd.

Heifers are the genetic future and productivity of the dairy herd. When a significant number of heifers calve with in- flamed, often permanently damaged mammary tissue, total production, milk quality, and overall herd health plummet.
Although the majority of mammary gland development occurs during the first pregnancy, most producers don’t inspect heifer udders until freshening or until the cow develops a clinical infection. By then, it is often too late to effectively treat the infection or to salvage functional mammary gland tissue.

In order to preserve overall herd health and productivity, producers should make a point of evaluating udders long before heifers calve. Multiple studies have proven that prepartum antibiotic treatment with dry cow therapies is extremely successful in clearing heifer mastitis. With aggressive prepartum monitoring and treatment prior to freshening, producers can significantly reduce the number of heifers calving with mastitis.

Heifers become susceptible to mastitis pathogens as soon as they begin to produce mammary secretions. This may occur as early as six to eight months of age. Calves can develop intra-mammary infections during any one of the four stages in the heifer-raising period: (1) during hutch housing, (2) after weaning, (3) during the breeding period, or (4) late gestation. The majority of these infections persist for the next 12 to 18 months, causing often irreparable damage to mammary gland tissue. Immediately after calving or relative early in the f irst lactation, these heifers break with clinical mastitis and an increased somatic cell count (SCC).The high prevalence of mastitis in the heifer population was relatively unknown until a study conducted by Dr. Stephen Nickerson, at that time on the faculty at Louisiana State University, was published in 1995 in the Journal of Dairy Science. Scientists from the LSU Hill Farm Research Station collected milk samples from 116 pregnant and unbred Jersey heifers from four herds. Nickerson detected   bacterial infections in an overwhelming 97% of the heifers and 75% of the quarters sampled. Signs of clinical mastitis were found in 29% of the heifers and 15% of the quarters. Subsequent studies have produced similar findings regarding the incidence of heifer mastitis.

Coagulase-negative staphylococci are responsible for the majority of subclinical intra-mammary infections in heifers. This group includes Staphylococcus hyicus and Staphylococcus chromogenes. The second- leading cause of heifer mastitis is the highly contagious Staphylococcus aureus. Environmental streptococci found in soil, manure, and bedding rank third on the list of mastitis pathogens. Other potential infectious organisms include the Mycoplasmas and coliforms.

The high incidence of Staph. aureus mastitis in heifers poses the greatest threat to production. Readily spread throughout the herd, Staph. aureus can manifest itself in varying degrees of severity, ranging from subclinical infection to gangrenous or fatal mastitis. Staph. aureus is a persistent, tenacious microorganism. Although it is possible to alleviate the signs of clinical mastitis, it is extremely difficult to clear this microbe from the body of an infected cow. Over 60% of Staph. aureus infections in heifers continue into the second lactation.

In contrast, the environmental streptococci are considered minor mastitis pathogens and have less of an effect on SCC. Such infections usually remain in the streak canal and are resolved without treatment during the first two weeks of lactation.

Heifers become exposed to mastitis pathogens through several routes: environmental contamination, cross-suckling of infected calves, consumption of mastitic milk, and mechanical transmission by biting flies.
Several additional risk factors were observed in Nickerson’s research program. Data collected from this project found that the overall prevalence of intra-mammary infections was twice as high in Jersey heifers (66.7%) versus Holstein heifers (35%). In addition, the physical  characteristics of heifer mammar y secretions cor responded to the frequency of infection.

Researchers also noted that heifers with fly bite lesions or scabs on the teats had a 70% frequency of intra-mammary infections compared to a 40% frequency in heifers with normal teats. Not surprisingly, herds that used fly control had a signif i- cantly lower percentage of infected heifers than herds without fly control. The reduction was especially evident with regard to Staph. aureus and Streptococcus spp. infections.

To control heifer mastitis, producers must identify and treat the infection during the prepartum period. Spontaneous cure rates for the major mastitis pathogens are extremely low.  Without antibiotic therapy, only 9% of Staph. aureus infections and 6% of infections caused by environmental streptococci will resolve.

Multiple studies, some conducted with support from the AJCC Research Foundation, have demonstrated the outstanding success of using dry cow treatment to control and cure intra-mammary infections in the prepartum heifer. Data published by the Hill Farm Research Station shows that antibiotic infusions during gestation or two months prepartum are more than 90% effective in clearing mastitis infections.

Successful prepartum antibiotic therapy results in decreased SCC and increased milk production at calving. Another advantage of treating infections prior to freshening is that no milk loss occurs during the treatment period.  According to research published by Dr. Stephen Oliver, Co-Di- rector of The University of Tennessee Food Safety Centre of Excellence, untreated heifers freshen with an increased SCC and produce 10% less milk in the first lactation than heifers that are treated before freshening.

Overall, prepartum treatment of mastitis is much more effective than therapy administered during lactation. In another study conducted by the Hill Farm Research Station, antibiotic treatment of heifers and cows infected with Staph. aureus resulted in a cure rate of 83.3% in the heifers versus 30% in lactating cows.

Infusion of long-lasting antibiotics into the relatively small area of the prepartum udder contributes to the efficacy of early mastitis treatment. Heifers lack the damaged mammary tissue found in cows which have suffered previous bouts of mastitis. This lack of scar tissue allows the antibiotics to effectively penetrate all areas of the udder. Early treatment is effective in clearing prepartum infections but does not protect the animals against future infections with mastitis pathogens.

Mastitis treatment of heifers before freshening constitutes extra-label drug use. Producers must consult with their herd veterinarian and establish a valid client-patient relationship before treatment can be administered. A written protocol must be developed and up-to-date treatment records maintained for every animal. The risk of antibiotic residue in milk is considered minimal unless the heifer calves early. In this case, the milk must be tested for antibiotics before it is mixed in the bulk tank.

When administering dry cow therapy to heifers, producers must take care not to introduce new bacteria to the teat during infusion.  Animals must be adequately restrained in a manner that allows the handler to easily inspect, clean and disinfect the teats before treatment.  In many cases, a tilt table is used.

The current literature recommends that handlers clean the teat ends with an iodine dip followed by alcohol.  The designated dry cow product should then be infused using the partial insertion method.  After treatment, the teats should be dipped into iodine and allowed contact time of one minute.  Finish by patting the teats dry with a paper towel and applying the barrier dip.

Diligent management and early attention to prepartum udder health are essential components of any heifer mastitis prevention plan.  At birth, calves should be separated and placed in individual hutches that prevent cross-suckling. Mastitis pathogens harboured in the oral cavity are easily transferred from infected calves to the developing mammary tissue of herdmates.  Pooled colostrum, as well as colostrum from infected cows or cows of unknown status should not be fed to calves.  Like- wise, producers should not offer calves hospital milk or milk from mastitic cows.  Highly contagious organisms such as Staphylococcus aureus and Mycoplasma in milk will readily establish intra-mammary infections in calves. Lacking a feasible alternative, hospital milk must be pasteurized before it is consumed by young stock.  To prevent the spread of environmental streptococci, heifer calves should be provided with clean dry housing and adequate fly control.

Separate close-up heifers from the dry cow group and provide them with a clean calving environment to prevent intra-mammary infection at freshening.  Immediately after calving, collect a composite milk sample from fresh heifers and submit for bacteriological testing.  To further reduce the risk of environmental mastitis, producers can vaccinate heifers with the J5 bacterin which protects against coliform mastitis.

In addition to these strategies, several studies have documented the benefit of supplementing rations with selenium and Vitamin E.   These nutrients are believed to improve udder health by aiding in the immunological defence mechanisms of the udder.

It Pays to Focus on Prepartum Health

“The traditional view that heifers are mastitis free has been shattered,” says Dr. John H. Kirk, Extension Veterinarian at the University of California–Davis.

When heifers develop intra-mammary infections before calving, the results can be devastating to the future of the herd.  Freshening with damaged mammary gland tis- sue, these animals will likely never reach their full milking potential.  Besides calving with an increased SCC and decreased milk production, infected heifers serve as a source of exposure to the rest of the herd.  Fortunately, producers can avoid the hazard of heifer mastitis by adhering to basic management principles, giving special attention to fly control, and by focusing attention on the health of prepartum udders. 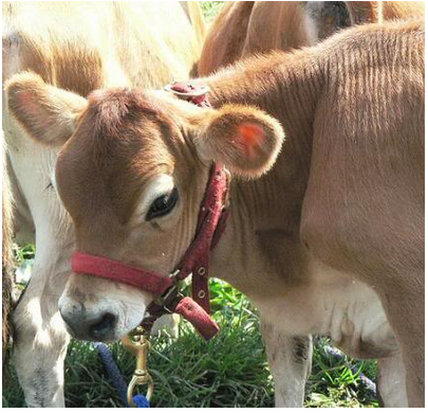