The Piedmontese / Piedmont or razza bovina Piemontese is a breed of domestic cattle that originated in the region of Piedmont, in north-west Italy. The calves are born fawn coloured, and turn grey-white as they mature. Piedmontese cattle carry a unique gene mutation identified as an inactive myostatin allele that causes hypertrophic muscle growth, or double muscling.
​Purebred Piedmontese cattle are homozygous, meaning they have two identical alleles present for this unique gene. They have garnered attention from breeders of beef cattle in other parts of the world, including North and South America. A small group of select Piedmontese bulls and cows were imported into Canada in the late 1970s, and into the United States in the early 1980s, and were used as the foundation breeding stock to develop a new breed of beef cattle known as North American Piedmontese cattle. 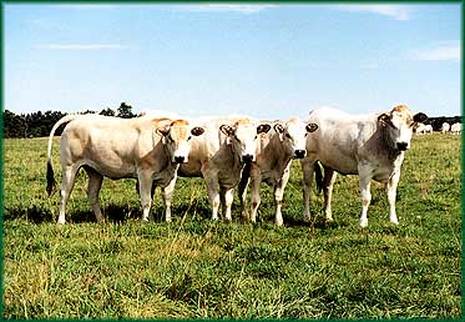 Piedmontese is a dual-purpose breed: the cattle are raised for their milk, which is used in the production of several traditional cheeses of the region, including Castelmagno, Bra, Raschera, and Toma Piemontese; and are also raised for meat, as beef from Piedmontese cattle is seen as a premium product. 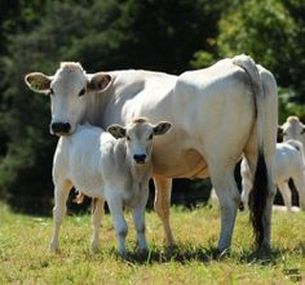 The bulls have a grey or pale fawn coat, with black hairs on the head (especially around the eye sockets), on the neck, the shoulders, the distal regions of the limbs and sometimes on the lateral faces of the body and the hind limbs. The cows have a white or pale fawn coat with shades of grey or pale fawn. At birth the coat of the calves is of a deep pale fawn colour. The tongue, the palate and the external mucosae are black.
The cows are of a medium size (550 - 650 kg), at birth the calves weigh on average from 40 to 45 kg. The male fattening calves are ready for slaughtering at a weight of 550-680kg due to very good kill out percentages. Despite their size, the weight gain of Piemontese cattle is high, reaching  above  2 kg a day in the calves between weaning and slaughtering, when feeding and environmental conditions are optimal. 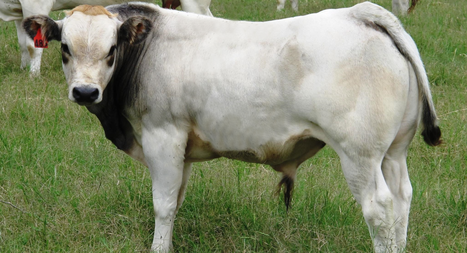 The particular characteristic of the Piemontese cattle breed is the muscular hypertrophy, better known as the 'double muscle factor'. The double muscle factor appeared at the beginning of last century. From a genetic point of view, the double muscle factor has always been considered a natural mutation which can occur in living organs, even if the probability is very low. The mutation which has taken place in the Piemontese breed is different from the ones of other breeds as it has a  delayed introduction to the calf only becoming apparent a couple of weeks after birth so easing the calving process.

Piedmontese cattle are Italy's most popular breed and their numbers are growing worldwide. Breeders around the globe including producers in Australia, Brazil, Canada, Denmark, Great Britain, Holland, Mexico, Poland, and New Zealand are actively engaged in breeding Piedmontese cattle.