The Romagnola breed origin is ancient, going back to the fourth century AD when the barbarian hordes of the Goths reached Europe with their cattle and settled in the Romagna region of northern Italy. These cattle then became the ancestors of the modern day Romagnola Breed.

For centuries this breed was used as draft animals which explains the resultant well developed, muscular and solid structure with sturdy legs and hooves that were needed on that tough and tenacious terrain. Here it remained virtually unchanged until the eighteenth century when the breed began to undergo selection in order to achieve a dual meat-production/work aptitude.

Thanks to sound selective activity, the now called Podalica type, began to take on the characteristics of the modern-day Romagnola cattle. At the International Exhibit in Paris in the year 1900, the Romagnola won first prize as the best beef-cattle breed. In any case, selection was aimed towards this dual purpose until the fifties when this dual purpose started to become less important following the introduction of mechanization. Improvement was subsequently orientated towards a specialization in beef production.

As a result, today Romagnola bulls are amongst the largest of the beef breeds. Although their very heavy muscling was once sought for draft, that characteristic is now attracting attention to them for meat purposes. Their muscularity over the loin, rump and through the lower thigh is especially pronounced.

The purpose of selection as far as the Romagnola breed is concerned is to obtain cattle with a marked capacity to produce beef (significant growth rate, early maturation and yield at slaughter) with excellent eating quality characteristics, while ensuring the ability to adapt to all environments with superior fertility and maternal function.

What is immediately striking about the Romagnola breed is its compact structure, which is due to the balanced development of the animal's trunk featuring notable thickness, and is also related to its well-expressed muscle development and exceptional leg structure. This compactness does not imply coarseness and must be accompanied by a light and distinctive head. Its agile movements and lively yet docile temperament represent additional elements that make it easy to appreciate the functional traits of a breed whose dynamic past can account for its great versatility in adapting even to harsh environments.

COAT - White with shades of grey spread, especially around the eye-sockets, the neck, the thighs and the ears.

PIGMENTATION - Black pigmentation should be seen in the following areas: oral mucosa, perivulvar and perianal area, switch and sheath hair, muzzle, hooves, tips of the horns and base of the scrotum The persistence of reddish hair exclusively around the poll area, a grey tail and partial depigmentation of the oral mucosa are tolerable in subjects with valuable functional-morphological traits.

Hair colour is ivory with darker shades of grey that are more intense on the forequarters, especially in bulls. The coat changes appearance depending on the season. During the winter the hair becomes much thicker and darkening in colour and conversely during summer the hair gets shorter and lighter. The variation in coat thickness allows the breed to adapt easily to a range of environments and temperatures. Romagnola calves are also born wheat-coloured and then turn white at around three months of age. The presence of red hair, particularly on the poll, is only tolerable in young cattle.

HEAD - Distinctive, expressive and light, not overly short; with a straight profile and a flat forehead with a broad muzzle.

Head dimensions must be proportionate to the animal's overall size, must indicate lightness and distinctiveness, showing very evident secondary sexual characteristics. The frontal profile should be straight or slightly concave and the forehead should be wide. The eyes are lively and well hooded within the socket and must have almond-shaped eyelids. The muzzle is wide, with broad cheek muscles. The dewlap must be light around the neck area. Ears are wide and set horizontally, and are extremely mobile.

Powerful and muscular neck, covered with numerous skin folds. The neck is more muscular in males, even at an early age. The dewlap should be light.

SHOULDER - Broad and muscular, set closely to the trunk, parallel to the back line and properly angled.

The shoulder must be wide and should be covered with abundant muscle tissue. It must show harmonious continuity with the adjacent areas. In addition, there must be a proper joint angle between the shoulder blades and the upper leg bones (115-120°).

They must be broad, muscular and flat, in relation with the productive capacity of this breed. This area must show notable muscle development on a general level and must blend harmoniously with the adjacent areas.

BACK - Straight, long, broad and muscular.

This is an area of fundamental importance, since these muscles yield the highest quality cuts that are the most tender and most valuable. The most important of these is the latissimus dorsi (eye muscle) which contributes to the value of the lumbar region. The back must demonstrate the greatest possible muscle development, to the point of presenting double convexity, blending well into the adjacent areas of the withers and loins without any discontinuity whatsoever.

In addition to the longissimus dorsi, this region includes other sublumbar muscles that constitute premium cuts such as fillet and sirloin. Like the back, the loins must also be extremely muscular, long and full. The dorsal line must be straight or slightly inclined from front to back (particularly in adult males). This shape indicates excellent structural strength and muscle tone.

This feature must be broad and powerful, muscular, sloping and full.

THORAX - Broad and deep, with well-arched ribs and well-covered with muscle mass.

The area has a primary role in determining the development of the rib cage and thus of adequate coronary and pulmonary function. Therefore, it is an important index of constitutional strength. In the Romagnola, the ribs are well arched and set vertically. Thorax height is always greater than the distance from the sternum to the ground.

The modern Romagnola type also involves a volumetric decrease of the abdomen, which must be well supported, making the underline practically straight. Adequate abdominal capacity is found in the increased length of the trunk, which works to the benefit of weight and yield.

RUMP - Long, broad and covered with enormous muscle mass; horizontal or slightly inclined from front to back. The sacral vertebrae are not very marked. Slender tail with proper insertion point, descending to the hock.

No compromises are possible as far as the surface and muscle development of the rump are concerned, given the importance of this area in producing premium cuts. The tail area must be flat and the tail must extend at least to the hock. The transverse diameters (pin bones) are pronounced, so that this breed is predisposed to an extremely low rate of calving problems, even at first calving.

These areas, which are of primary importance in beef cattle, are particularly well-developed in Romagnola subjects of both genders. Muscle development, which tends to be short-lined, is compact and has markedly convex profiles in both areas.

UDDER - Well-developed vascularized and broad-based with even quarters. It should feel spongy with well-directed teats that are suitably sized for suckling.

The Romagnola cow is able to raise its calves until weaning without any problems, even in unfavourable environments. The udder should have a good capacity, with harmoniously developed quarters and properly-sized teats in order to ensure that the calf can be fed without any problems, particularly during the first few days after birth.

TESTICLES - Well-proportioned and developed descendent in the scrotum area. 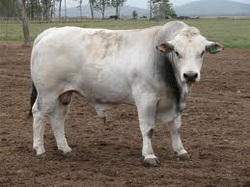 The Romagnola has special significance as a crossbreeding sire.

The heterosis generated by a well planned crossbreeding program gives a significant increase in productivity that cannot be ignored.

There is no better choice for this than the Romagnola.

The Romagnola has the scale and structure to produce outstanding growth rates combined with the muscle and carcass qualities that suit the most discriminating modern beef markets.

The great advantage of the Romagnola over other European breeds is the Bos Indicus influence in its genetic makeup. This is evidenced by the grey coat, pigmented skin and the black pigmented, hooded eye. It is also evidenced by the vigorous constitution and the degree of resistance to cattle tick and buffalo fly that enables Romagnola bulls to be run with Brahman type cows with no extra care needed.

The Romagnola is also producing outstanding results when bred with British breeds in southern areas. Again this derives from the extra growth potential and carcass quality it transmits to the cross bred progeny. The Romagnola is renowned for producing a tender, fine-grained flavoursome product from carcasses that fit under the Meat Standards Australia grading scheme at an early age.

The versatility of the Romagnola breed allows store producers to create demand for their steers from backgrounders, feedlotters and bullock finishers.

One of the Romagnola breed's assets is the exceptional nutritional and visual quality of its beef and the quality of Romagnola beef is universally recognized. The meat has a superior taste with a light rosy-red color, fine texture and excellent marbling. The lower Cholesterol levels have been confirmed scientifically. Since 1982 in Italy the Quality of Romagnola meat has been guaranteed by a consortium of Breeders and Butchers who control the production cycle from beginning to end. In this way, the superior quality beef is offered to consumers in specially controlled butcher shops and markets where demand continues to be greater than supply.

Because of the early maturity of the breed, an animal at the age of 20-22 months has an especially high live weight, close to that of a mature animal. This provides the the ability to finish out at any age from vealer to long weaner. Rapid growth rate combined with a dressing percentage of 62-64% provides the ideal carcass of tender lean meat that today's consumers demand.

The Romagnola offers muscling through genetics and not through the use of hormones and growth stimulants. This saves the farmer input costs and allows him to produce high quality, tender and tasty beef. 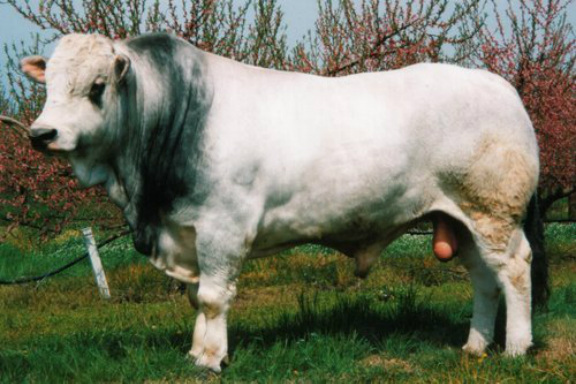