The breeds which are known under the following names in their country of origin shall be recognized as Simmentaler and shall be eligible for registration in the Herd Book:

Today, the Simmental breed is present on all continents and with 41 million animals is the second largest breed in the world. The World Simmental Federation (WSF) was formed in Zagreb, Yugoslavia in 1974. The purpose of the WSF is to unify Simmental breeders around the world and provide them with a vehicle through which they could exchange research and information and increase the influence and importance of the Simmental breed.

During the last 30 years Simmental-Fleckvieh has been bred in many different countries (continents) with different environmental conditions. That's the reason why the breed looks quite different from one country to another.

These red and white animals are highly sought after, because of their rapid growth development; outstanding production of milk, butter and cheese; and for their use as draught (draft) animals. They are known for their gentle nature, impressive stature and excellent dairy qualities. 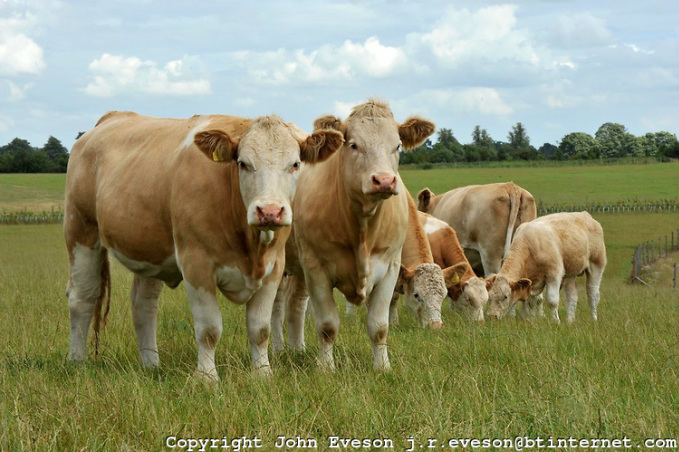 The breed which is today called Simmental Fleckvieh has its origin in the Simmen valley in Switzerland.

In the middle of the last century the first bulls were exported form the Simmental to central Europe and the breed Fleckvieh was developed from crossbreeding with existing indigenous breeds.

In the last decade of the last century and first decades of this century the breed was utilised for milk, beef and draught purposes in Europe and for extensive beef production in Namibia and South Africa.

In the late sixties and during the decade between 1970 and 1980 the breed which had been changed to a dual purpose breed for milk and beef, established itself on all the continents.

The old name Fleckvieh, current in Europe, was internationally changed to Simmental to make clear the origin of the breed.

The breed is still bred as a milk-beef dual purpose breed in central European countries, however, a few countries have started to give more consideration to milk production. In the America, Australasia, certain "new European Simmental countries" and Africa the breed is mainly used for beef production.

Simmental cattle have proved very successful in crossbreedings with beef breeds to improve growth and milk performance. This results in improved growth, more muscling and market acceptance. Simmentals, when used in crossbreeding on dairy breeds improve the muscularity and beef quality. Simmental is of special significance when used for crossbreeding with different breeds best adapted to extreme environmental conditions, such as Zebu and Brahman. The excellent suitability for extensive ranch and suckler herds has further enhanced the spread of the breed. Good mothering ability and excellent temperament are important characteristics of the breed.

Parts of the Body

The skin is medium-thick to thick, supple and can easily be lifted up over the ribs.

The hair is short, strong and shiny.

The head is medium long and medium to broad with a slight dish between the eyes. The head of the bull is shorter and wider, the head of the cow finer. Sex features are distinct.

The eyes are large with large flexible eyelid. Eyebrows are prominent with flexible, thick, wrinkled skin around the eyes.

The nose is large and oval and the muzzle is broad with large, strong incisors fitting well against the pad.

The neck is strong, medium long and well set into head and shoulders.

The chest is long, broad and sufficiently deep.

The ribs are broad and long with a round arch.

The back is long, broad and tight.

The loins are plane, broad and well muscled.

The belly is roomy with a relatively deep flank.

The pelvic area is long and wide and slightly sloping

The thigh is muscular on the inside and outside.

Feet and legs are medium strong and dry, and correct in stance and gait.

The hocks are wide, dry, with a correct angle and well-defined hamstring.

The pastern are relatively short and tight.

The hooves are hard, uniform, oval and closed.

The udder is closely attached to the belly reaching well forwards and backwards. 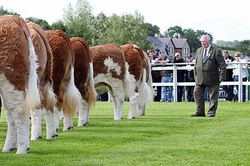 VISUAL APPRAISAL
In order to adapt and perform under the local extensive and harsh farming conditions, the Breed Association already in 1950 introduced a system prescribing visual appraisal for structural correctness(1) by breed experts as one of the prerequisites for registration in the herd book. Every animal is inspected between 1 and 3 years of age and animals that do not meet the requirements are not registered and their progeny can never enter the herd book. This evaluation is carried out according to a standard of excellence which is based on experience gained over 50 years with the breed in South Africa and Namibia.
(1) Structural correctness = The appearance of an animal in terms of how well (or poorly) its structure conforms to the breed's standard of excellence

PEDIGREE with a difference
For every approved animal an official pedigree is issued. This pedigree is proof that the animal as well as its ancestors have passed appraisal for conformational standards.

BREED IDENTITY
In our country an established(2) breed will not survive without a breed identity. Colour may vary from dark red to cream which is spread over the body in any pattern. The following animals are not registered: black, completely red and predominantly white.
(2) Different to developing or composite breeds like Simbra.

SIZE
Because of the negative characteristics which are associated with larger cattle(3), the "middle-of-the-road-size" is recommended for the last 30 years already and discrimination against large rangy animals is practised at inspection, judging and courses. The cow which calves yearly in her natural environment and weans a heavy calf relative to her weight (± 50%), has the size that is pursued by the Breed Society.
(3) Higher maintenance, weak constitution, late puberty and heavier birth weight and thus calving problems).

Any signs of impurity: 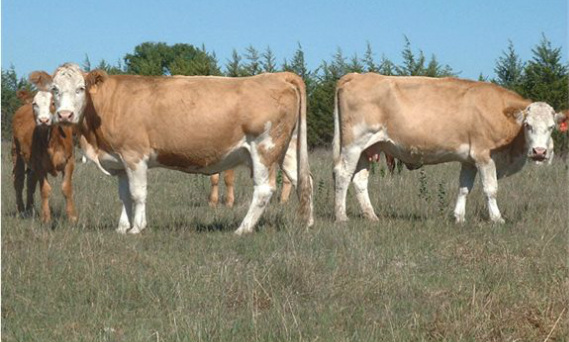 Mission:
The Federation aims to promote the breed by means of:
​
*  a co-operation between breeder organisations
*  the establishment of common breeding rules *  exchange of information
*  the comparability of pedigree and test results
*  establishment of guidelines for the acknowledgement of pedigree
*  publicity

The World Simmental Federation has its headquarters in Zollikofen, Switzerland. The official languages are German, English, French.

There are two kinds of organisation countries that interact with the Federation - Members and Observers.