A beef cattle breed that originated from Zimbabwe. It is a form of Sanga cattle closely related to the Tswana breed from Botswana. Tuli cattle have a small thoraco-cervical hump and are uni-coloured: yellow, golden-brown or red.
​
The Tuli is eminently suited to extensive ranching systems. It has the unique ability to utilise even the worst quality grazing and still produce top quality meat. The amazing adaptability of the Tuli is self evident if one considers their distribution. Tulis can be found flourishing in sandy, semi desert areas in Namibia, Botswana and the Northern Cape; in hot heartwater bushveld areas such as Zimbabwe, Limpopo Province and the Lowveld of Mpumalanga; in the high rainfall, sourveld of high altitude Mpumalanga and Natal where redwater and gallsickness is rife; in the Drakensberg Mountains where snow falls regularly; on the extensive savannah grassland of the Free State; in the arid Karoo with it.s unique scrub bush; in the cold, misty mountains as well as the coastal bush of the Eastern Cape. Today there are also Tulis in Australia, Canada, the USA, South America and in tropical Zambia.

​Developed over the centuries to suit the arid environment. They were docile, productive and highly fertile. These traits were preserved in the Tuli breed. Cattle were originally distributed from the research station to local African farmers, but white farmers soon became interested in the breed which afterwards became very popular.
​

In recent times attributes of economic value have been the aim of scientific selection and have given us the modern Tuli. In female animals the accent has been on fertility, milk production and low calf mortality while in bulls it has been growth, feed conversion and carcass quality. Great care has always been taken not to compromise the natural hardiness and adaptability of the breed. The Tuli developed in relative isolation and has a unique genetic make up which makes it particularly successful in cross breeding programs - not only is a high degree of hybrid vigour achieved but a large percentage of polled calves as well. Tuli steers and Tuli-cross calves finish faster off the veld than many other breeds.
Conformation of visual appearance as well as performance of the Tuli is monitored and enforced through the Tuli Breed Standards of Excellence. 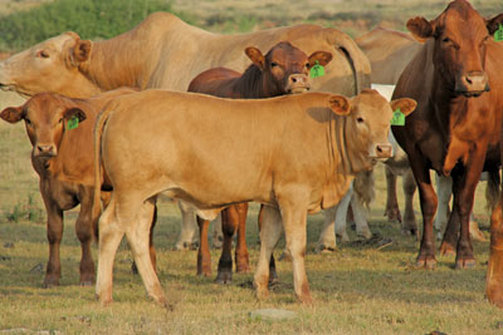