One of the oldest of the several breeds of French cattle. Charolais was developed in the district around Charolles in Central France. The breed became established there and achieved considerable regard as a producer of highly rated meat in the markets at Lyon and Villefranche in the 16th & 17th centuries. There also is historical evidence that these white cattle were being noticed as early as 878 A.D. The cattle were generally confined to that area unitl after the French Revolution. However, in 1173, Claude Mathieu, a farmer and cattle breeder from the Charolles region, moved to the Nievre province, taking with him his herd of Charolais.

The breed flourished there, so much so that the improved cattle were known more widely as Nivernais cattle for a time than by their original name of Charolais. One of the early influential herds in the region was started in 1840 by the Count Charles de Bouile. His selective breeding led him to set up a herd book in 1964 for the breed at his stable at Villars near the village of Magny-Cours. Breeders in the Charolles vicinity established a herd book in 1882.

Charolais cattle have had a reduced or nil instance of eye cancer - this is closely associated with the skin pigmentation and not the skin colour. 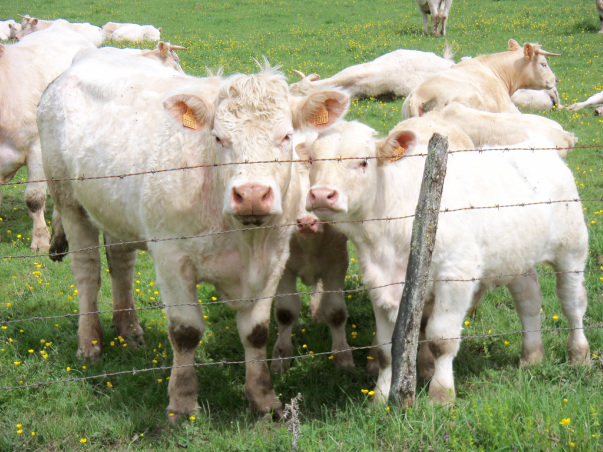 The Genetics at work

This aims to give an insight into the genetics at work and how the colour of Charolais is determined. Considering the depth of the subject and the limited amount of written material available, this is only a summary to outline the genetics involved.

The colour of an animal is determined by its genes. In fact, the colour attribute is said to be 'simply inherited', that is, it is not affected by the environment. Once an animal has a genotype for a particular coat colour, environmental conditions are not likely to change it.

In order to explain the variety of colour that is possible in cattle, some basic genetic definitions may help:
* Gene: this is the basic unit that may be inherited
* Locus: location of the gene (on the chomosome)
* Allele: the (chemical or functional) possibilities that can be present at a locus (location)

When it comes to coat colour of cattle, there are a number of alleles that interact to ultimately determine the colour outcome.

BASE COLOUR
Surprisingly, it has been written that there are only two basic coat colours for cattle; red and black. What this means is that the gene at the 'coat colour locus' (not its real name) has two possible alleles - red and black. Black is 'completely dominant' over red. This would result in either homozygous black (BB); heterozygous black (Br) or homozygous recessive red (rr). (This situation has been documented with Angus cattle and in particular the fact that some Angus carry the red gene yet appear black). The only commercially available test for determining coat colour is the test that identifies base coat colour.

As not all cattle are black or red, (and the fact that so far this does nothing to explain white) the variety in colours is a result of the interaction of alleles at other loci.

The Externtion (E) locus is responsible for most of the variation in cattle coat colour. (Olson 1999) There are three alleles present at this alleles present at this locus, and in order of dominance are: E(d) (dominant black) > E(+) (wild type allele responsible for combinations of red/reddish-brown/black) > e (recessive red). This takes the base coat colour one step further by suggesting that the shades of brown (between black and red) are explained by the wild type allele.

Based on the fact that genetically there are only two basic colours, and combining this with the effects of the extention locus, the genetic background for Charolais is e/e (homozygous recessive red). However, there are numerous more loci with other impacts to determine the outcome of coat colour especially considering we have not mentioned white yet. This is by far the most difficult piece of informaton to digest - the fact that the base coat colour of Charolais is actually red. I recently had the opportunity to discuss this issue with a scientist from Merial in Canada who mentioned that they can now test for the homozygous recessive rred gene in Charolais. When I discussed this with them they confirmed that all Charolais will return this result as it is only at the base coat colour that can be tested. Again, this does nothing to explain white so read on.

The most influential locus for Charolais is tht of the Dilution locus. The two alleles are D, which is responsible for the white coat colour for Charolais and completely dominates over its wild type (non-diluting) allele d. "Most Charolais are homozygous for both e and D, with the red coat that would have been produced by the e/e genotype being modified to an essentially white one by D/D" (Olsen 1999)

To reiterate, the genetics that influence the white coat colour of Charolais is known as the "diluter gene" which effectively masks the red base colour and allows Charolais the distinctive colour of White.

An example of 'dominance' is the fact that the diluter gene D completely overrides the not diluting d such that Dd would result in the same dilution effect as DD.

An example of 'epistasis' is the interaction of the diluter D masking the background colour e/e. In fact it does such a good job of masking the background colour that is is very nearly completely dominant. The result of this fact - that it is 'nearly' dominant, goes some way to explain the effects when the diluter gene is not there and is represented by the wild type homozygous d/d.

The presence of the non=diluter gened/d means that the background colour (or otherwise) of the allele, a degree of red colouring may show through. The coat may show anything from a light straw colour to apricot. Actually, the French describe 'not white' Charolais as "Blonde" and most choose to cull these. (Therefore the French may in fact be selecting against the recessive wild type - non diluting gene d/d).

Rather than thinking of Charolais having the diluter geneas making the cattle either white or not, we need to recognize that the diluter gene, just as its name suggests, dilutes the red base colour rather than rids it.

There are other alleles which influence the coat colour. With Charolais, a spotting allele is also present. This allele highlights the skin pigment which is otherwise hidden by the dilution gene so that when the animal has the non-dilution gene, broken colour will show up if the spotting allele is switched on.

It has often been said that the broken colour that is visible in the coat of red factor animals has more to do with the pigmentation of the white Charolais. Effectively, the spotter gene (which causes broken colour) can be present in Charolais that are white and go unnoticed due to the effect of the diluter gene masking any difference in colouring. It is only when the diluter gene is less prevalent that such a spotter gene becomes visible.

The point is that animals with broken colour are not necessarily crossbred animals, even if they do appear so. Having said that, there are regulations in place to ensure that the image of Charolais is not compromised from misconceptions that broken colouring can cause. It is not the red factor (or lack of diluter gene) that is totally responsible for broken colour, but more likely that the broken colour (spotter gene) will be more visible when the diluter gene is less prevalent.

As mentioned, the colour of Charolais is determined by its genes. Management and selection pressure can influence the outcomes. This is true for any genetic selection.

This extract is courtesy of the Charolais Society of Australia Ltd. 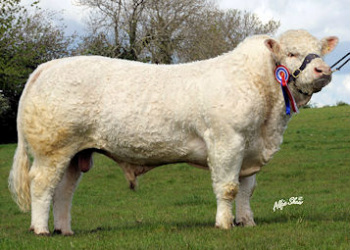 * Bull should be well-muscled animal on good strong feet and legs to carry the heavy weight associated with the breed
* Head should have a wide muzzle with a strong jaw placement
* Eyes should be set reasonably wide apart
* Ears should be big
* Head should be sat proud on a strong muscular neck
* Back should be long and level without dips, particularly behind the shoulder
* Good heart room and a minimum amount of brisket in the forequarter
* Tail-setting should be set comfortably into good wide plates over the hindquarter
* Hindquarters should also have a good depth of second thigh and should be well rounded 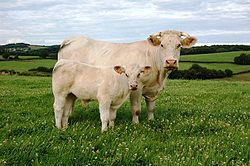 * Should have a feminine appearance and should not be heavily muscled and musculine in appearance as this sort tends to be either poor or irregular breeders
* Head should be wide muzzled with a longer rather than boxy type appearance
* Like the bulls, the head should be alert
* Back should be long and level with a good spring of rig and a minimum of brisket in the forequarter
* Tail setting should not be dropped and preferably should be slightly raised as this is alleged to be associated with easier calving
* Legs should be of strong flat bone on good sound feet
* Udder should be of good capacity with four well-formed teats for suckled calf production

Cross with Charolais to improve a herd

Charolais are more adaptable than British breeds. Pliable skin, no eye cancer problems, more tolerant of the heat and can withstand temperature variations

Charolais can add an extra 0.4kg / day (conservatively) ensuring cattle can be turned off over a month earlier out of the paddock or feedlot. This equals real flexibility

Charolais are satifying the domestic markets through butcher, supermarket and hotel trade, while meeting export demands

In addition to extra weight, Charolais infusion improves yield to exceed 60% while also increasing Retail Beef Yield to over 70%

Even and adequate fat coverage consistent growth rates and 80% of Charolais tested scoring 2 star or better for tenderness, all combine to ensure market specs 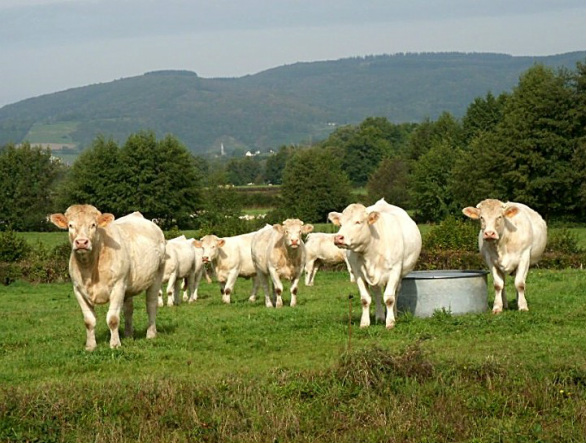