The Breed to Cherish

The Kerry Cow is black with perhaps a little white on the udder. She is of dairy type with fine bone, well ribbed and a fine skin. She has a fine pair of white horns tipped with black, although most herds are dehorned now. She has character, is alert and light on her feet.  Occasional red calves are born but these are not eligible for entry in the Herd Book.

The breed is probably descended from the Celtic Shorthorn, brought to Ireland as early as 2000 BC. They were developed as a milking breed suited to small subsistence farms of southern and western Ireland. They cause less damage to soils in high rainfall areas than larger breeds. By 1983 there were only around 200 pedigree Kerry cattle in the world, but numbers have since increased.
​
Kerry Cows are very healthy and enjoy a long and useful life, still strong and calving regularly at 14 and 15 years of age. They are extremely hardy and will out winter quite happily, as their bodies seem to have been designed to throw off the rain, and they can grow a good coat of hair which keeps the cold out. Their agility enables them to travel safely over rough ground and they do little damage to the pastures. 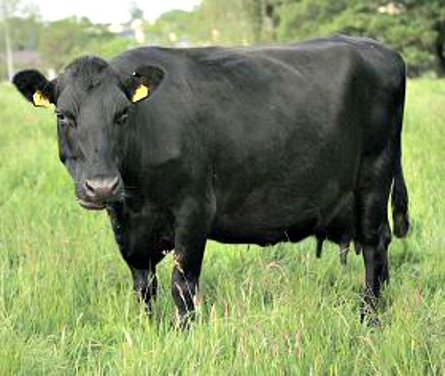 The cow should be long, level and deep, with good substance, sloping shoulder and fine chine. her colour is black but a small amount of white on or immediately in front of the udder is permissible. her head should be long, fine and clean cut, eyes large and prominent. Her horns should be fine with an upward tendency, mottled or white tipped with black and her bone should be free of coarseness, her coat soft and skin pliable. her udder should be soft, extending forward, the teats being placed square and well apart and milk milk veins prominent and large. Her tail should be long and well put on, a few white hairs are permissible in the tassel, but the flag should not have a white appearance. The Kerry cow usually weighs about 350 kgs - 450 kgs when in breeding condition.
​

The bull should have the leading characteristics of the breed as described in the female, but should show a fine masculine appearance. His colour is black, a few white hairs are permissible in the tassel, but the flag should not have a white appearance.
​

The globules of butterfat in Kerry milk are much smaller than those found in other breeds, thus making it easier to digest. As a result it is ideal for feeding to babies, invalids and others who find it hard to take fat. This emphasises the breed as eminently suitable for fresh milk, cheese and yogurt production. Several Irish farmhouse cheese makers use Kerry milk. The average milk yield is between 3000 and 3700kg at 4% butterfat. However there are quite a number of cows capable of yielding over 4500kg. 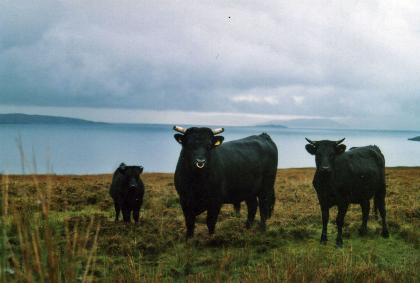 This breed of small black cattle, native to Ireland and known as the Kerry, had been the dominant cattle breed in Ireland until the middle of the nineteenth century.  The introduction of new cattle breeds from England in the nineteenth century led to a decline in the popularity of the Kerry.  The Kerry was pushed to the hill regions of the west and south west of Ireland and eventually to county Kerry, where it remained popular with the farmers of that region.  The general decline in numbers continued until 1983, when the world population of pedigree Kerry females had fallen to approximately 200.  This was a perilous situation for the survival of the breed.  The Kerry Cattle Society in co-operation with the Department of Agriculture put in place a scheme towards the maintenance of pure-bred Kerry herds in Ireland.  The objectives of the scheme are:  "To encourage the maintenance of a number of separate herds of Kerry Cattle in Ireland and the creation and maintenance of a sufficient reserve of pure-bred breeding stock."  The scheme has had a positive effect with an increase in the number of Kerry breeding stock.  To help preserve and improve the quality of the national herd Kerry bulls of exceptional merit are available at the AI stations.
​