The Small Breed with Big Potential

The Dexter originated in the South Western region of Ireland. Like the Kerry, they are descended from the predominately black cattle of the early Celts.


Dexter cattle are the smallest of the European cattle breeds, being about half the size of a traditional Hereford and about one third the size of a Friesian (Holstein) milking cow.  The Dexter breed originated in Ireland.

Dexter are classified as a small, friendly, dual-purpose breed; used for milk and beef. However they are often listed as a triple-purpose breed, since they are also used as oxen. Management practices vary by breeder and by country. Their versatility is one of their greatest assets, and probably has something to do with the number of countries Dexter cattle are found, including North America, South Africa, Australia, and much of Europe.

The success of the Dexter over the last 25 - 30 years is quite outstanding. The breed's ability to adapt to varying and extreme climatic conditions and to different systems of management is a typical characteristic. They have established themselves well in many parts of the world. Animals have been exported to Australia, New Zealand, Cuba, Argentina, Kenya, Zimbabwe, Italy, Belgium, Denmark and Germany. Several of these countries have their own breed societies, which only goes to show how well the breed has become established worldwide.

Truly, the small cow with the big future... 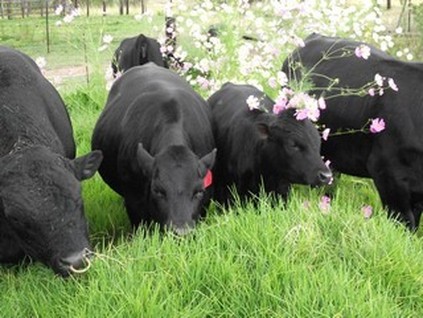 The Dexter breed originated in southwestern Ireland from which it was brought to England in 1882. The breed virtually disappeared in Ireland, but was still maintained as a pure breed in a number of small herds in England. The Dexter is a small breed with mature cows weighing between 600–700 pounds (270–320 kg) and mature bulls weighing about 1,000 pounds (450 kg). Considering their small size, the body is wide and deep with well-rounded hindquarters. Although usually black, a dark-red or dun Dexter is sometimes found. They are always single-coloured except for some very minor white marking on the udder or behind the navel. Horns are rather small and thick and grow outward with a forward curve on the male and upward on the female. The breed is suitable for beef or milk production, although individual herd owners often concentrated on growing either one or the other. 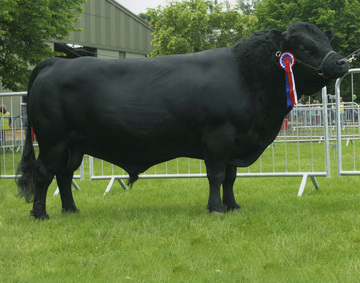 The Dexter is a dual purpose breed with both beef and dairy qualities.  In judging, both these qualities will be taken into consideration.

Type:
Both types of Dexter, i.e. short legged and non-short legged, are of equal merit.  However, extremes of either type are discouraged.

Head:
Short and broad, tapering gracefully towards a broad muzzle.  Jaws wide enough to accommodate well-placed teeth with an even bite. Eyes bright and prominent, with a kind and placid expression.

Neck:
Deep and thick, but not too short or too long, blending well into the shoulder.  Head should be carried above the spine.

Horns:
Moderately thick, with an inward, upward curve.  Removal of horns will not be penalised in the show ring.  Polled animals are acceptable, but must be notified in writing.

Cow:
Udder should be well attached with high and wide rear attachment and a strong median suspensory ligament.  The four teats should be of medium size, well placed on the udder, hanging plumb and of equal length.  All four quarters should be of equal size.

Legs:
Good width between both front and back legs.  Legs should be of moderate length in proportion to body size, squarely placed under the body and perpendicular when viewed from the rear.

Feet:
Feet should be short toed, deep heeled and level soled.  They should not turn inwards or outwards.

Skin:
Loose and pliable.  Hair short and sleek in summer, longer and thicker in winter.

Beef animals in the US are expected to mature in 18 months and result in small cuts of high quality lean meat, graded US Choice, with little waste.  The expectable average dress out is 50 to 70 percent.  The beef produced by Dexters is well marbled and tends to be darker.

Dexters produce a rich milk, relatively high in butterfat (4%) and the quality of the milk overall is similar to that of the Jersey.  Some claim the milk is more naturally homogenised than other milk due to the smaller fat globules. Dexters can reasonably be expected to produce 2 to 2.5 gallons (7.6 to 9.5 litres) per day.

The cows are exceptionally good mothers, hiding their calves almost from birth if there is any cover for them to hide. They will produce enough milk to feed 2–3 calves, and often will willingly nurse calves from other cows.  They are known for easy calving.  This trait, along with the small size of the calf, has produced a small but growing market in the United States for Dexter bulls to breed to first calf heifers among the larger beef breeds to eliminate problems at parturition. 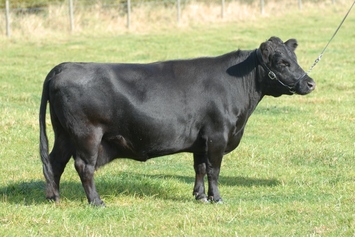 What does the breed look like?
The Dexter breed is the smallest British breed of cattle. It is a dual-purpose breed, with the average weight of a cow being some 300 - 350 Kg's and standing 92cm - 107cm at the shoulder. There are two recognized types, short legged and non-short, both of which have their equal merits.

The breed comes in three colours, predominately black, but also red and dun.

Are they good mothers?
Dexter cows are extremely maternal and because of their dual purpose qualities will milk well.

Calving problems are rare and newly born calves are up on their feet very quickly.

Dexter's are noted for their longevity and should breed regularly for 14 years or more.

What about carcass quality?
The breed is early maturing. Beef of excellent quality and flavour, with good marbling, can be produced economically. Dexter steers can finish on grass at 20 -24 months of age without supplementary feeding, with average carcase weights of between 145 - 220 Kg's. Because their good meat to bone ratio, a killing-out percentage of over 56% can be achieved.

The meat is very popular with the consumer, though farm shops, farmers markets and home freezer consumption because of its outstanding flavour, small joints and minimal waste.

The milk is of very good quality with high butterfat (BF) and protein levels; average BF % is well over 4% and protein 3.51%.

Can Dexters crossbreed?
Mature cows can be successfully crossed with most native beef breeds, and will produce excellent fast growing progeny. Care must be taken if a continental bull is to be used. Ensure the bull has an easy calving record, and that cows are 'fit' and not overweight at calving.

Before Buying your Dexter

Find out its age and calving history. If she has not calved within the last twelve months insist on an explanation.  Is she an easy calver?  Is she easy to handle?  Has she been milked, left to suckle her own calf, been used to double suckle?  Is she halter trained?  Does she lead easily?  Ask to handle and lead her yourself. Is there a history of mastitis or milk fever?  Check for ringworm, warts, lice and ticks.  When buying a breeding bull take advice on how to keep and manage him.  It is very important that you see his progeny and that he has a quiet temperament.

What your Dexter needs

Dexters are thrifty and economical if managed properly.  They are excellent food converters and hardy enough to winter out providing they are well fed and have adequate shelter from the worst of the weather.

Cattle are herd animals that require company, preferably of their own kind. Consider buying a cow with a calf at foot, preferably in calf herself, or keep a steer with her until she calves.  You should not need a vet often, but sign on with your local practice before you need to call one out.