Santa Gertrudis cattle are a tropical beef breed of cattle developed in southern Texas on the King Ranch. They were named for the Spanish land grant where Captain Richard King originally established the King Ranch. This breed was officially recognized by the United States Department of Agriculture in 1940, becoming the first beef breed formed in the United States. The origin given by King Ranch is that it was formed by mating Brahman bulls with Beef Shorthorn cows, with the final composition being about 3/8 Brahman and 5/8 Shorthorn. In 1918 King Ranch purchased 52 bulls of 3/4 to 7/8 Bos indicus breeding to mate with 2500 pure-bred Shorthorn cows on the ranch.

Santa Gertrudis cattle are known the world over for their ability to adapt to harsh climates.

The breed is cherry red, occasionally with white markings on the underline, and has a short, smooth, slick coat. Santa Gertrudis cattle show many of the Bos indicus characteristics: the hide is loose and there are neck and navel folds; the male has a small Zebu-type hump. Ears are medium to large and individuals are horned or polled. The female is noted for her ease of calving and milking ability.

The breed is noted for heat tolerance as well as tick and bloat resistance. Carcases from very young cattle develop a large eye muscle of meat with little or no waste fat. Older steers yield well, with minimum fat cover acceptable to premium world markets. Weight for age is a noted attribute of the breed.

Factors contributing to the success of this breed

1. The number of cattle employed formed a large base for selection, which vastly increased the chances for the appearance of a variety of desirable types in every generation.

2. The interbreeding of superior crossbreeds to fix a desirable type.

3. A selection strategy to achieve genetically based progress in weight.

4. Possibly the greatest contributing factor was that the continuity and management of the process was in the hand of one person Mr Robert J Kleberg Jr, who not only conceived and formulated the breeding plan but remained responsible for the selection and breeding process during the entire development of the breed. 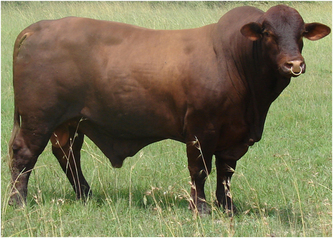 The Santa Gertrudis bull is renowned as one of the industry's most efficient beef producers. You will notice immediate improvements with the first calf crop.

The calves will have no trouble at birth with smaller birth weights than most of the recently imported breeds and yet they are renowned for their rapid growth.

The use of a Santa Gertrudis bull will introduce heat tolerance, tick resistance, and most importantly, when crossed with British breeds, an immediate drop in the number of losses due to eye cancer and pink eye.

In recent years breeders of Santa cattle in Australia's more temperate climates have consistently recorded significant reduction in losses caused by bloat. Santa cattle have the ability to thrive on lush pasture without suffering from bloat - a problem which causes untold losses every year in some of Australia's southern States.

Mature Santa Gertrudis bulls weigh in excess of 900 kg with 1000 kg and more not uncommon. The average scrotal circumference is frequently in excess of 40cm.

Weight gain is one of the most highly heritable performance traits in beef cattle - daily weight gains of Santa Gertrudis bulls is regularly monitored at more than 1.5kg per day.

Santa bulls have outstanding foraging ability which means they can thrive even under the harshest conditions and they are noted as very active and athletic sires.

An inherent trait of Bos Indicus is their unlaboured gait which enables them to easily cope with long distances to food or water, unlike some European and British breeds. 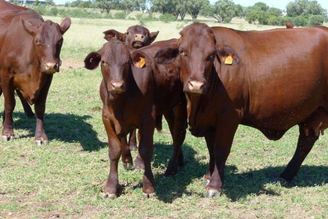 The Santa Gertrudis female has become a highly-sought-after commodity in the Australian beef industry with regular sales of females from central and northern Queensland to cattlemen in southern regions of New South Wales and Victoria.

Few beef cattle breeds can boast regular sales of females into these areas and the reasons are clear. The Santa Gertrudis cow is one of the most efficient producers in the industry.

The mature Santa cow can weigh up to 750kg, she has excellent milking ability with high butterfat content, few calving problems and in competitive tests has produced consistently larger calf crops than other breeds.

One of the major attractions of Santa Gertrudis female is their longevity. Producers regularly record details of 14-15 year-old cows still producing a calf each year without fail. One breeder had a foundation second cross female which had produced its 18th calf at 21 years-of-age.

Because of this outstanding ability, producers are not forced to continually use replacement heifers; this translates to better gross margins, and more money in your pocket.

Their natural mothering instinct is also evident with regular examples of one or two females keeping watch over a large number of calves while the other cows graze.

For establishing a good strong breeding base the Santa Gertrudis female has much to offer. 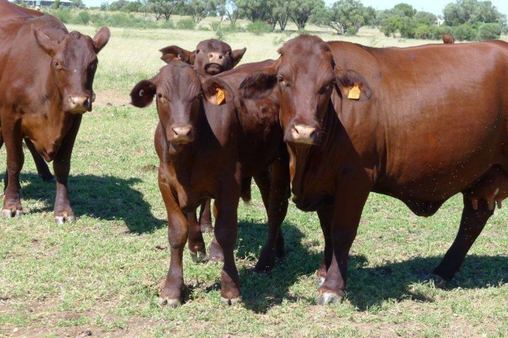