The Pinzgauer is a breed of domestic cattle from the Pinzgau region of the federal state of Salzburg in Austria. It has distinctive colouring, with chestnut-brown sides and white back and underside. It was in the past a triple-purpose breed, raised for meat, milk and draught use. There is a naturally polled sub-type, the Jochberg Hummeln.  In 2007 the breed was not considered by the FAO to be at risk.


According to genetic and morphological studies, the Pinzgauer cattle breed is most closely related to North German lowland breeds.

The Pinzgauer was first referred to as a breed in 1846, and prior to this called "Pinzgauer Fasel" or "Pinzgauer Schlag." In the 19th century, they were bred into strong stock for work on farms, at breweries, and in sugar-beet areas. In its heyday, the Pinzgauer became the most popular cattle breed in Austria-Hungary, subsequently expanding through Eastern Europe. 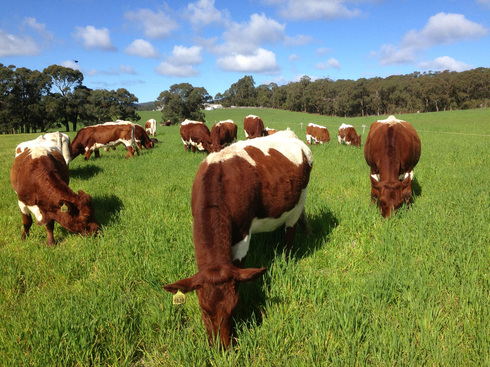 Pinzgauers are highly fertile. Heifers are early maturing and calve at an early age, mostly before they are 30 months old. Obviously, the most important economic factor in any breeding program is reproduction. When it comes to male fertility, Pinzgauers possess the two most important qualities in a breeding bull: high sperm count and libido.Pinzgauers are well known for their longevity. Bulls continue to breed up to 11 to 12 years of age. Their strong legs and hard dark hooves carry them through many successful working seasons. Cows however, breed up to the age of 16 to 18 years, but cows breeding up to 21 years of age are no exception.

The Pinzgauer breed has a naturally polled type, the Jochberg Cattle.

Beef production:
With an intensive fattening the average daily weight increase is about 1,400 g with a slaughter yield of 56-58%. The good meat quality, with first rate marbling, fine fiber and light red color satisfy consumer requirements.

The animals are auburn in color. A luscious chestnut-colour is the breeding target. Black animals have occurred, but rarely, and were once seen as a curse. After 1900, black bulls were removed from the breeding system, and the black colour vanished. All Pinzgauers have the breed-typical white pattern in common: a broad white stripe lengthwise along the whole back. The abdomen, chest, udder, and tail are white as well. 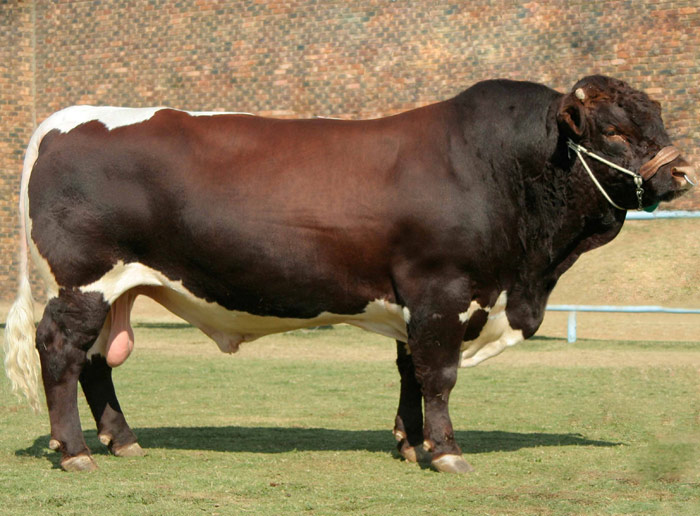 The use of this term for the Breed Standard is to be applied to the show ring first and foremost.  All things being equal, animals exhibiting any of the listed discriminations will be downgraded in the show ring.  The APA realizes the complexity of the genetic markings involved with the Pinzgauer breed,  however, it is desirable that breeders follow the Standard as closely as possible in their breeding program.

The use of this term for the Breed Standard will mean disqualified from the show ring.  It is the goal that each and every breeder selectively breed against any disqualifying trait.

The best of both worlds offering tender juicy flavoursome meat without a lot of fat wastage.

Pinzgauer beef is unique in that it can be well marbled for taste and tenderness yet still have a minimum amount of external fat.

Studies performed at the U.S.D.A Meat Animal Research Centre, Clay Nebraska, show that Pinzgauers produce meat that is the most tender of any beef breed and routinely exceeds other breeds in juiciness and flavour. Because of the enzyme make up of these animals, the meat retains it’s tenderness without the use of artificial chemical process.

Additionally, Pinzgauer steers in the feedlot showed above average gains and a minimum of health problems. 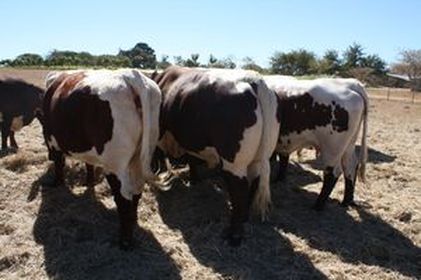 The Pinzgauer is adaptable to a variety of climates.  Pinzgauers thrive in the cold, snowy regions of the U. S. and Canada and also do well in the hot and humid regions of Texas and Florida.  Eye problems are rare.  Smooth hair and firm but flexible skin prevents tick and other insect infestations.  The pigmentation of the skin and hooves protects the breed from thesun.  The breed reaches sexual maturity at a very young age and retains above average fertility.

Pinzgauers are a moderate frame breed that will compliment most other breeds.  Birth weights are comparable with other continental breeds ranging from 70 to 80 lbs.  Weaning weights are on average slightly higher due to improved milk production and quality.  The average female weighing around 1200 lbs. will typically wean a 600 lb calf.

USDA Meat  Animal Research Center trait averages for steers of Pinzgauer breeding have over 61% Choice, over 69% Retail Product, Rib Eye Area of 11.28 sq in.   Shear force (tenderness) test for Pinzgauer was the best at 4.47kg versus 4.5 for Angus with most breeds being over 5.0kg.

Longevity of breeding life is the norm with cows still calving at 13-16 years of age.

Probably the most notable quality of the Pinzgauer as a mother is its superb milk production ability.  Undoubtedly due to their origins as a dual purpose breed Pinzgauer cows are “designed” to produce large quantities of high quality milk.

It is rare to find a Pinzgauer that will not accept a first calf or not have enough milk to raise it properly, no matter what the conditions.  As such Pinzgauer and Pinzgauer cross cattle provide excellent fast growing steers 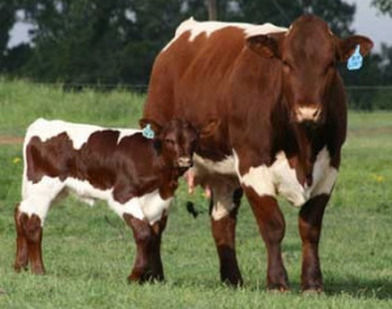 With a lot of today cattlemen breeding for black, many breeds have lost their identity as confirmation and breed traits have scarified all in the name of color. Crossbreeding has always produced the hybred vigor the commercial operation has required.

The day is soon approaching when breed identity will play an important part in selecting sires for commercial herds. Pinzgauers will put the distinctive white tail on these calves along with the other breed traits of growth, muscling feed efficiency, fertility, milking, adaptability, and quiet disposition. No cattleman, buyer, feedlot or packer will have to guess what cross has made these superb calves.

The keys to economical, efficient beef production are:
• Fertility
• Milk Production
• Feed Efficiency
• Carcass quality
• Pinzgauer possess these qualities, and will prove they are profitable because they are The Practical Breed.

Which system selected will depend on each breeders needs and goals. The fact remains - Crossbreeding is a vital factor in a commercial cattle operation.