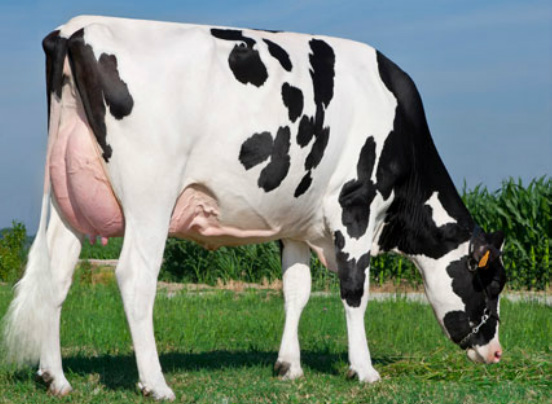 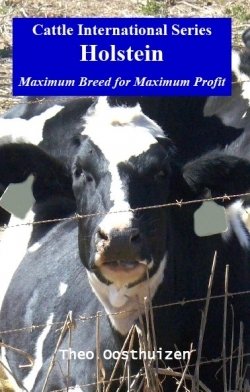 More Milk for your Money

Holsteins are the largest breed of Dairy Cattle in the World.

A very precocious breed, it benefits from a rapid growth rate and heifers easily calve at two years of age.

The power of good, deep cow families has been a major driving force behind herd development and cattle breeding as a whole. Dairy strength, tremendous spring of rib and capacity, desirable mammary and sound feet and legs remain assets, enabling the cow to consume much forage for a long, trouble-free life.

Classification is recognized foremost as a herd management tool.

Resilient animals possess the inherent characteristics and stamina to meet all internal and external demands imposed upon them today, and in the future.

The Holstein breed originated in the Netherlands, close to 2000 years ago. The black cows of the Batavians and the Friesians were bred and culled to produce cows that were the best use of limited land in the Rhine Delta region by producing the most milk - Eventually these animals evolved genetically into the efficient, high producing black and white dairy cows known as the Holstein - Friesian.

After World War II the Holstein - Friesian was selected for a high-yielding, large-framed, single-purpose dairy cow with an exceptionally good udder.
In the 1960s European dairy cattle breeders discovered the advantages of the Canadian and American Holstein - Friesian.

In order to distinguish the American and European Holstein - Friesian (which actually is Holstein x Friesian). Not only did Europe convert to Holstein dairy cattle, but the conversion spread all over the world, wherever the climate and conditions are suited for European dairy cattle.

The Gemanic people, traditionally hunters and fishermen, brought their cattle to the rich plains of the Rhine River about two to three thousand years ago. The common origin of all the "Black and Whites" appears to be a population of dairy-type cows found along the North Sea coast (from Friesland to Jutland, passing by the Holstein region) which had been more or less crossed with Shorthorns.

The breed was first improved at the beginning of the 18th century by a group of Batavian and Friesian breeders whose primary aim was to increase milk production. After 1945, the butterfat content and conformation were improved. Bulls chosen to improve these three traits guarantee the considerable genetic progress and the success of the breed through their progeny (only black males were chosen but good red cows were kept), gradually spreading throughout Holland and the northwest of France and eventually being known as "Dutch" cows.

A very precocious breed, it benefits from a rapid growth rate and heifers easily calve at two years of age.

A specialised dairy breed, it has the highest yield of milk as well as milk production since the improvement of protein content has become one of the industry's breeding aims.
It is also endowed with an excellent functional morphology, that is, an udder adapted to mechanical milking, a body capacity that provides optimal valorisation of fodder, a slightly sloped rump for easy calving and feet and legs which provide good locomotion.

The cattle are dehorned, but when the horns are allowed to grow, they develop into medium length and are turned outwards, with their tips upwards, as was common in 19th century Dutch cattle.
More than 19 million animals are registered in the Holstein Association's herd book. The ancestry of most of these animals can be traced back to animals originally imported from the Netherlands.

Holsteins can be found on every continent and in almost every country. Such convincing evidence of genetic superiority has created an active export market for Holstein genetics. Currently, live Holstein females and males, including frozen embryos and semen are being exported to more than 50 countries and used extensively to improve foreign food supplies and dairy producer incomes.

Holstein dairy cattle dominate the milk production industry. The reasons for their popularity are clear: unexcelled production, greater income over feed costs, unequalled genetic merit, and adaptability to a wide range of environmental conditions. Added up, this means more profit for the dairy producer who milks Holsteins. This point becomes even clearer when you consider that nine of every ten dairy producers currently milk Holsteins. 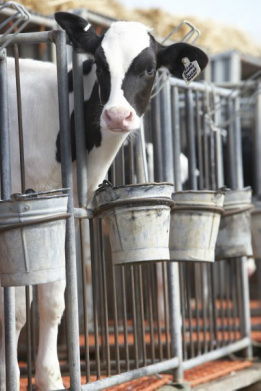 The cow is evaluated on a 1 - 9 objective scale for 22 linear traits. These parts are grouped into sub - sections on the cow scorecard - distinct components having importance in the working function of the dairy cow

Mammary System:
The mammary system remains the most important and heavily weighted section. Soft, pliable udders with the capacity for production, though height and width of attachment, are required. A functional udder with proper teat placement makes milking easy under any system. An udder, well attached to the abdomen, lasts for numerous lactations.

Feet and Legs:
Feet and legs have critical importance in sustaining longevity in commercial housing environments. Tracking straight and moving with ease, a cow should possess a steep foot with good depth of heel.

Dairy Strength:
Dairy strength identifies cows with well-sprung, open ribs, combining strength with a relentless will to milk. Not so much size or mass, but a balanced dairy frame with adequate strength is desired.

Rump:
A proper rump structure is important in reproduction. A sufficient slope from hooks to pins is desired for ease of calving and a healthy transition to the milking line. The rump should display adequate width and be anchored to strong vertebrae.

Holsteins, being superior for their milk production, have excellent udders. The Holstein is the highest yielding dairy breed in the world.

Top producing Holsteins, milking twice a day have been known to produce up to 67 914 pounds of milk in 365 days.

(Parts of this text is extracted from Wikipedia)

Milk is an opaque while liquid produced by the mammary glands of female mammals. Mammary glands are highly specialized sweat glands. The female's ability to produce milk is one of the defining characteristics. It provides the primary source of nutrition for newborns, before they are able to digest other types of food. The early lactation milk is known as colostrums, and carries the mother's antibodies to the baby. It can reduce the risk of many diseases in the baby.

The extract components of raw milk varies by species, but it contains significant amounts of saturated fat, protein and calcium as well as Vitamin C. Unfortunately the vitamin C is destroyed in the pasteurization process.