Ticks all the boxes

There are three distinctive strains within this breed - some countries actually treat them as three individual breeds.
The Galloway is one of the world's longest established breeds of beef cattle, named after the Galloway region of Scotland, where it originated, during the 17th century. It is now found in many parts of the world, such as Canada, the United States and Australia.
It is now found in many parts of the world, being exported to Canada in 1853, the US in 1882 and Australia in 1951. The breed enjoyed success during the 1950s but this subsided during the foot and mouth crisis. Today, the breed is enjoying a revival, due to the demands of the beef market. The breed is considered to be average in size and they have a thick coat, due to the climate of their native Scotland. 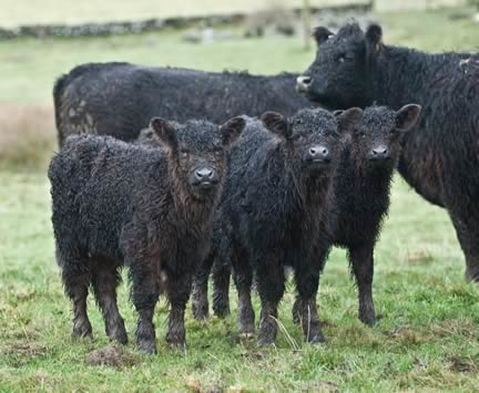 Solid colour (black, dun or red)
The average Galloway cow will weigh 1000 to 1500 pounds and the average bull weighing 1700 to 2300 pounds. The healthy birth weight for a calf is 75 pounds.
Galloways have a thick double-layered coat that is wavy or curly. This thick coat of hair insulates their bodies so well that they have a minimal outer layer of fat on their bodies, which would otherwise create waste at slaughter. This coat sheds out in the summer months and in warmer climates. Despite the animal's usual use in beef production, there is evidence of Galloway herds being milked in Cumberland for cheese production.
​
The Galloway is naturally hornless, and instead of horns has a bone knob at the top of its skull called the poll. This breed's shaggy coat has both a thick, woolly undercoat for warmth and stiffer guard hairs that help shed water, making them well adapted to harsher climates.
​

Hardy, Low - Cost Suckler Cows
The Galloway is a maternal breed, the cows are easy calving and have an abundant supply of milk. She is long lived and can be relied upon to produce calves every year, with many cows producing regularly into their teens and beyond. This trait alone can determine much of the economics and efficiency of any cattle operation. She will thrive and produce on low-cost winter rations and in summer on unimproved rough grazing. Galloway females are an ideal cross-breeding foundation with strong hybrid vigour.

Easy Calving and Vigorous Calves
Galloway calves both pure or crossbred are hardy, vigorous and have a 'will to live' that gets them up and nursing quickly, whilst small at birth, they grow quickly on their mother’s rich milk.

Easy Care / Easyfed
Galloway cattle are naturally polled which they readily pass on to any other breed, which eliminates the need for dehorning.
Galloway cows can be out-wintered and only require the minimum of feeding, reducing the cost of feeding, straw and housing.
One area the Galloway cow will surpass her bigger continental cousin is in her upkeep. Comparisons have shown that she requires around 25% of concentrates and around 10kg of silage less per day.

Environmental Benefits
On hill and upland pastures the unselective grazing action of the Galloway improves the natural herbage for domestic stock, wildlife, and game through the removal of excess roughage.
Galloways are becoming increasingly popular for controlling weeds, rashes and purple moor grasses on hill land, where sheep no longer graze.
In some areas Native Cattle like Galloways can receive extra subsidies for grazing disadvantage land.

Replacement Heifers
The Galloway female when crossed with any continental bull, will produce either replacement suckler cows with all the attribute of her dam, excellent mothering abilities, milkiness and hardiness.
Galloway x Saler heifers are much in demand as suckler cows as they have size and will pass on their easy fleshing qualities to their progeny.

Grass Fed, Juicy, Tender and Flavoursome Beef
Galloway steers and heifers yield beef of the highest quality on low cost finishing rations. 23 to 30 month old Galloway bullocks are regularly killed out over 350kg on an R4H Grade. They are in great demand by many local butchers whose customer appreciates the taste of this natural, flavoursome beef.
Studies have shown that Galloway beef is low in total fat and in saturated fat. The beef is also high in beneficial Omega 3 and Omega 6 fatty acids, therefore more beneficial than pork and as good as chicken and salmon.​
​

Galloways have it all: 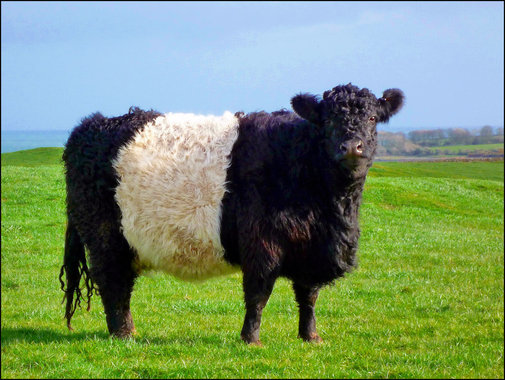 ​Belted Galloway Beef has been shown in a research study conducted at the University of Guelph - to have a total fat content of about 2%, an extremely low percentage. The same study showed that the Belted Galloway Beef tested only contained about 1% saturated fat. In addition, it showed that Belted Galloway beef had the same fat content as chicken and fish so fits in well with a healthy diet. Belted Galloway beef is exceptionally tender, full of flavour and juicy and were the winners of the 2003 Sydney Royal Show "Beef Taste Test". Data collected in the U.S. has shown that the beef dresses out at 60 - 62% of live weight making it a very profitable breed. 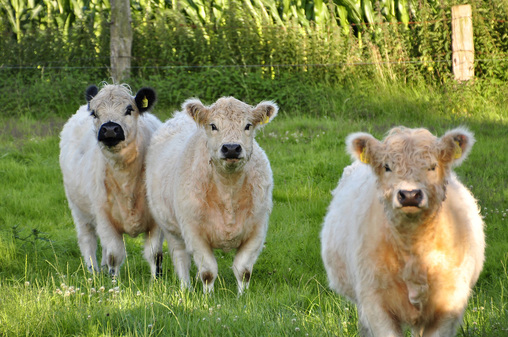 ​White with coloured tips
​White Galloways are a recent addition to the Galloway family. They are an attractive and beneficial cousin but they do contain genetics that are not Galloway and they have little recorded history.

​The origins of the White Galloway are uncertain, but they are thought to have originated in south west Scotland either from mating with the white offspring of a black Galloway or possibly from crossing White Park cattle with the local Galloways.
​

A White Galloway should have a good covering of thick, white hair all over the body. A small amount of coloured flecking is acceptable but too much is undesirable, as is a bluish or grey tinge to the coat. The “points” refer to the coloured marking on the animal’s feet, muzzle and ears. These can be black or red, and should be a good, deep colour. If White Galloways are continually bred to one another there is a tendency over time for the markings to fade or even disappear.